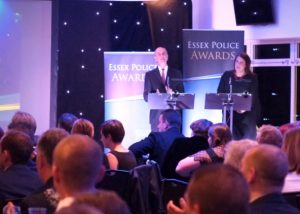 A ceremony to honour the efforts of officers, staff and volunteers took place last night and saw 15 awards presented by Chief Constable Stephen Kavanagh.
Almost 200 people attended the ceremony held at the Chelmsford City Racecourse. Nominees and their guests enjoyed the yearly event where trophies for bravery, dedication and charitable efforts are presented.

Officers, staff and teams had to meet certain criteria to win an award, which included:

• Delivering strong local policing, working to earn the trust of the public
• Delivering better value for money, efficiency and productivity
• Reducing the risk of harm to our communities
• Developing and valuing police officers and staff and enhancing professionalism.

There was one winner from Thurrock

Jasmine is the Thurrock Head Cadet and has been instrumental in assisting the Volunteer Police Cadet (VPC) leaders to establish the unit, which is now more than a year old.

She is admired and looked up to by the rest of the team and has shown maturity beyond her years.
Jasmine took the lead in creating messaging groups and co-ordinating events outside of her normal volunteering hours and, following an increase in knife crime within the borough, she led on the production of a knife crime and gang awareness video. This was so well produced that it has been requested by other agencies to use in their campaigns.

Jasmine balances her VPC duties with volunteering for other youth organisations. Her unit leaders have been exceptionally impressed by her leadership skills and hope that she will progress to take on an adult leader role.

Chief Constable Stephen Kavanagh, said: “I’m really proud to be able to formally recognise the efforts of officers, staff and volunteers who have been nominated for these awards because of some of the outstanding things they have done while serving the public of Essex.

“Every day I hear stories about acts of bravery, amazing dedication and occasions when someone has gone above and beyond to help a vulnerable person and keep them safe.

“I am privileged to lead such a great group of men and women who together work tirelessly to make this county safe. The ceremony is held to recognise a small number of them who have been nominated by their colleagues and say thank you for their service.”

Roger Hirst, Police, Fire and Crime Commissioner for Essex, said: “It was a great honour to attend the Essex Police Awards Ceremony. Every day Essex Police officers, staff and volunteers do amazing things to protect their communities. It is great to see the efforts of some of those people recognised tonight.”