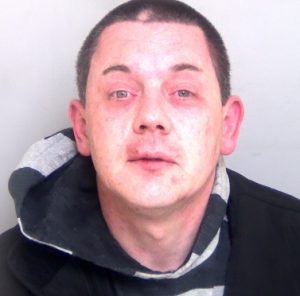 A burglar who targeted a vulnerable elderly woman and conned her into letting him into her home has been jailed for six years.

The 83-year-old victim, who has vascular dementia, had told family members in February this year that a man claiming to be a relative had been going to her home in South Ockendon.

But checks showed the relative had not visited her recently.

She then began to say she had no money and that the man kept visiting and getting her out of bed late at night.

When they searched the house, they could not find any of her money, nor her engagement and eternity rings.

Growing concerned, they set up a covert camera in March.

It captured footage on April 2, when a man later identified as Jason Patmore could be heard knocking on the victim’s door shortly before 11pm. He asked the victim for water for his car, and while she was filling up a bowl from the kitchen he went upstairs.

He then went back downstairs, put the bowl on the floor next to her handbag then asked her for a towel, claiming he had spilled some water.

It is believed he took money from her purse while she was out of the room.

Patmore, 42, was identified by police officers who recognised him from the footage.

He was arrested on May 6 at an address in Alwen Grove, South Ockendon.

Patmore, of no fixed address, admitted two counts of burglary at Southend Crown Court on August 2.

He also admitted charges in connection with a number of unrelated offences.

He was sentenced at Basildon Crown Court on October 27 to a total of six years and made subject of a restraining order, preventing him from contacting the burglary victim.

“Her family are relieved he has been convicted and punished for his heartless crime.”