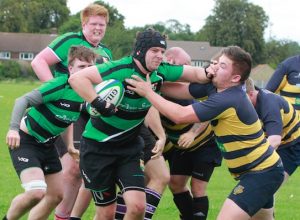 A 1st versus 2nd league match, experience versus youth contest, a battle between a team that has played together for years against a newly formed side and what a match its was.

Both sides gave a game full of great rugby and for the whole 80 minutes of play. Chelmsford had a strong pack and moved the ball through their back line with a real understanding, Thames initially were under the cosh in the pack but with a quick few changes they started to get on level playing field. It was Chelmsford’s backs that undid the deadlock with a very well worked move, their running lines and change of direction left the Thames defence flat footed.

The remainder of the first half was extremely competitive, Thames spilt the ball several times whilst making some great attacks, sadly could not capitalise on their efforts but their defence was rock solid and Chelmsford were kept at bay. The second half started badly for Thames conceding an unusual decision giving Chelmsford a scrum only 5 metres away from the Thames try line. The powerful experienced pack of Chelmsford pushed their visitors over and then the home side converted to make the score line 12 – 0

For the remainder of the time like the first half the second saw both teams swapping phases of play and there wasn’t much between the two sides. Thames battled on and tried their utmost to get on the score board but just couldn’t manage to get what they desired. Max Clarke did come very close when he chased is own kick through but was judged not to have won the foot race and Chelmsford kicked out from their own 22.

With a try for Chelmsford in both halves the win for the home side had been worked hard for, quite easily the best game that Thames had taken part in this season and despite the loss so much was learnt by the young side. Thames are at home next week and are expecting another competitive game against Eaton Manor.