Aveley: A tale of two villages……. 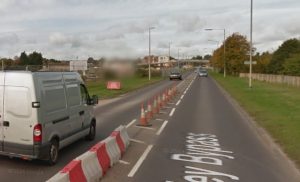 RESIDENTS in Aveley are upset and believe a new housing estate has stolen their heritage.

A sign has gone up in the town directing drivers to a new estate off the town’s by-pass and it is angering residents who already live in the area, who describe it as ‘confusing.’

The new sign at the top of the bypass saying ‘Aveley Village’ directs drivers down the bypass towards the new-build homes, rather than down Mill Road, where residents say the ‘actual’ Aveley Village is situated, and has been for generations.

Residents feel so strongly about maintaining their area’s name of ‘Aveley Village’ that they have set up a petition calling on Thurrock Council to ensure builders Persimmon change the name of the new estate.

Local resident Teresa Webster has lived in ‘the village’ for 23 years and said: “It’s caused widespread confusion. I recently spoke to a chap who said he’d just bought a house in the village, but when he told me which road I realised it wasn’t the village at all and was on the bypass.

“We are the village, we’ve had the village for years and people want to remain as the village. Initially when the boards went up before a shovel had been put in the ground, we were assured that all reference to Aveley Village would be taken down, and this is what now needs to happen. The developer now has to take down all material describing this development as the village.

“That’s why people are up in arms about this new sign because it seems like the opposite of this is happening.”

As well as the Aveley Village sign directing drivers down the bypass, residents have reported that buses are also now referring to the new-build estate as Aveley Village.

Jason Andrews, a spokesperson for Persimmon Homes Essex, said: “Aveley Village is the marketing name of the scheme and any signs are temporary for the duration of the scheme’s
development and sale.”

Residents have been complaining about Persimmon’s use of the name Aveley Village for years while construction has been going on. Complaints date back to 2013.

Then, sales and marketting director Norman Sharpe responded by saying it was only a marketing name and that “all roads, drives etc within the development will go through a formal naming process with the local authority.”