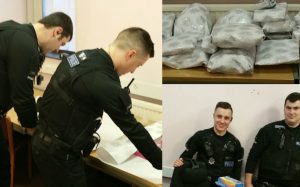 During the early hours of Saturday, December 16, police received reports of a break-in at a shed in the Chadwell St Mary area.

Officers attended and a 24-year-old man from Tilbury was arrested on suspicion of burglary. He was later charged and is due to appear at Basildon Magistrates’ Court tomorrow, Monday, December 18.

A number of items of property were recovered, which officers re-wrapped before returning them.