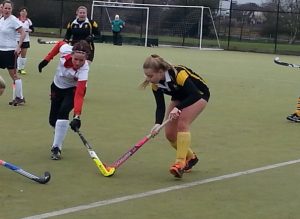 Thurrock knew they were up against it before even arriving as Wapping are top of the league and they set out with dead 11. From the beginning Thurrock ran tirelessly to keep up with Wapping’s passing and fought a good fight. Lou Parrott scored 1 goal for Thurrock from a short corner which kept Thurrock’s spirits up. The second half saw a clean sheet with no goals being scored which Thurrock worked hard to keep. Even with a couple of our own players being injured, Thurrock kept fighting and didn’t let Wapping into their heads. They play Basildon at home next week. Player of the match Sarah White.

Thurrock Ladies 2s faced a tough challenge against Havering 2s who are currently second in the table. The game began at a frantic pace with Havering eager to assert themselves on Thurrock, but Tees defended resolutely and grew into the game as the half progressed. Both teams had chances from penalty corners but at half time the match remained at 0-0.

In the second half, Thurrock’s confidence grew and showed some promising attacking play through Ally Bonner, Sally Willet, Sarah Judd, Emily Crown, Lou Harrison and Sasa Naidoo. At the other end Havering had numerous penalty corners, which were well defended by goalkeeper Ali Hadley, Louise Pike, Katy Martin, Cheryl Broadbent and Natalie Kerin. Cheryl saved one shot brilliantly off the line and Ali continued to make some great saves. One penalty corner resulted in a penalty flick which was fabulously saved by Ali. This knocked the confidence of Havering and there were no further chances for either side with the game finishing at 0-0. This was an excellent confidence boosting result for Thurrock who now hope to take this into their next game against East London. Congratulations to Alison Hadley for her player of the match performance. (photo also attached)

A series of unfortunate events meant that just 10 intrepid 3s took to the astro on Saturday morning for this top of the table v bottom of the table clash. Thurrock started very brightly and you couldn’t see that they were a player short but eventually Wapping exploited the overlap and went one goal up. Wave after wave of attack saw Wapping score twice more despite some heroic and, at times, acrobatic defending from Thurrock. The final score was 7-0. Player of the match Claire Brosnan. Thurrock 3s are at home v Braintree this Saturday.