Grays Held To A Draw By Hertford Town 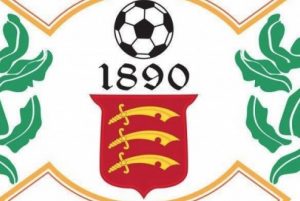 Blues once again failed to beat Hertford Town in a game that will leave a nasty taste in the mouth for Blues fans management and players when they were denied by the visitors who set out to disrupt Blues rhythm with a display that lent itself more to the thespian arts than football.Skipper Sharman was the main culprit contesting every decision, harassing the referee at every turn and capping his display with a blatant dive and melodramatic scream in an attempt to get the official to issue a card to a Blues player. The only surprise is he has not been nominated for this years Oscars!

Ade Cole was clearly targeted coming in for some robust challenges which amazingly went unpunished finally succumbing to injury in the second half. However it must be said Blues only had themselves to blame when they spurned a number of first half chances when they held the ascendency playing some well constructed one touch football.

The opening quarter saw Blues enjoy plenty of possession working the left flank where Joao Carlos was seeing plenty of the ball testing Sharman. Barry Cogan was rolling back the years in midfield linking the play with some deft touches , Ade Cole foraged industrially ably supported by the steel of Stan Muguo .Blues first opportunity arrived in the 12th minute when a Richard Halle free kick drifted just wide of the upright with keeper Mann left floundering.Hertford replied at the other end , a free kick deep in to the box failed to illicit a challenge from the Blues defence where Cole wasted a golden opportunity somehow missing the target from five yards.

Blues quickly responded , a corner was played short to Ade Cole who drove into the box whipped in a low cross which just failed to connect cleanly with the head of the diving Jamie Slabber. Kieran Bishop then found himself on the edge of the visitors box and curled the ball just wide of the far post. It was a momentary let off for the visitors when the 27th minute saw Blues go in front, Toner’s under hit back pass left Bishop in space, Mann raced from his line, reacting quickly Bishop played the ball into the box where Slabber slotted the ball into the unguarded net.

A goal down the visitors resorted to some dubious tactics, Cole was subject to an over the top challenge leaving him writhing in agony, incredible the referee failed to issue the warranted yellow card or even talk to the perpetrator, Cole came in for some more brutal treatment later in the half which again failed to bring a card.

Blues were indebted to keeper Charlie Burns when he denied O’Connor with a block , at the other end Mann kept his side in the game with a smart save from Slabber .Burns was in action again with another vital save from Cole.

Playing with the wind at their backs Blues had an ideal opportunity to build on their lead but it was Hertford who started the better winning a quick corner and free kick dealt with by the Blues defence.The visitors looked far more of a potent force closing down quickly and forcing Blues to hit long balls which failed to hit their intended target. Blues cause was not helped by the visitors going to ground dramatically disrupting the flow of the game but Blues were also guilty of compressing their play, Carlos the main culprit drifting inside .

Cole embarked on a thrilling run deep into the visitors half but made the cardinal sin of not getting his head up and looking for a teammate in space consequently he was shepherded wide of the goal and fired into the side netting. Blues play so fluent and pacy in the first half became disjointed , Slabber and Bishop became isolated and spent the half chasing long balls which played into the hands of the visitors.

Hertford launched a number of dangerous raids causing consternation at the back line and in the 58h minute they managed to breach the Blues goal. It came about from an error in similar fashion to Blues opener, the ball was given away carelessly on half way and eventually fell to Cole who unleashed a thunderbolt flying into the top corner past Burns despairing dive.

Once again Blues had allowed the opposition back into the game after failing to turn possession into goals in the first period, the visitors seemed content with the point looked to disrupt play again going to ground at the slightest challenge much to the anger of Blues fans and management.

Chances for Blues were few and far between at this stage although Halle tested Mann with a header,Carlos curled wide from a corner, Hertford came close when Burns made another smart stop. Right at the death Blues almost snatched a winner when sub Kai Brown rattled the woodwork but in the end had to settle for a draw and In terms of their overall performance it was a tale of two halves.

Although extending their league form to four games unbeaten they would have been disappointed not to have claimed all three points given the first half display when they were in total control.

A trip to Suffolk beckons next week when they travel to Mildenhall who registered an impressive 5-2 win at Tilbury, this will provide another test of their resolve in a bid to have a say in the play off.