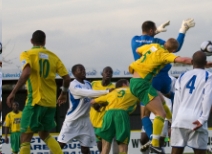 EARLY pressure from Thurrock as James Goode releases Jordan Clark on the left wing to twist his way into space and get in a cross which is cleared to Remi Sutton to shoot over. Merstham respond as Alex Addai, who was to prove a thorn in Thurrock’s side all game long, jinks in from the right wing, his shot is deflected behind for a corner. On the twenty minute mark Thurrock thought they had taken the lead, Merstham custodian Ashlee Jones fumbles the ball from Joe Christou’s corner and it looks to have crossed the line but with neither official having a clear view Merstham get the benefit of the doubt and the game continues.

Ronnie Winn brings the ball out of defence before playing into Clark’s feet, Clark shrugs off three defenders before finding Christou, he doesn’t get a clean connection and Jones takes an easy catch. A few minutes later Thurrock open the scoring, Sutton sets off on a familiar charge down the left wing before picking out Timothy Ogunrinde to cross into Christou but the ball is taken off his feet for a corner. Christou’s corner gets caught up between the players in the box and Perry Dunn plays a clever ball back out to Christou. It’s as good as another corner for Christou who swings the ball in once more, it’s half cleared to Sutton who mishits his first effort but as the ball spins back to him he makes no mistake second time around and rifles the ball in off the far post.

Ogunrinde chases down the ball on the right wing and pulls it back to Joel Nouble who holds the ball looking for an outlet before finding Reece Morgan speeding down the right wing, Morgan delivers but the ball is beyond Clark’s outstretched foot.

Merstham equalise in the thirty seventh minute and it is the troublesome Addai who gets past Sutton and drives the ball low across the area where Charlie Penny is on hand to touch home from six yards. Thurrock strive to get into the changing room in the lead. Christou flicks Morgan’s throw onto Joel Brown-Bampoe to shoot but Jones is well placed to save.

Merstham’s winner comes ten minutes into the second half. Perry Dunn is deep in Merstham territory as Thurrock push forwards, Jones mishandles the cross again but Liam Harwood comes to his rescue and clears downfield to Addai who again demonstrates excellent individual skill as he cuts in from the right wing and fires across Ben McNamara to score. Ten minutes later and again Addai breaks free but this time McNamara pulls off a great save.

Into the final ten minutes and Thurrock’s management make an audacious tactical change switching to three at the back and putting Ronnie Winn into his more natural position up front. It very nearly pays off straight away as Morgan’s throw comes through to Claudio Ribeirio-Goncalves for a snap shot just over the bar. Moments later Thurrock sweep forwards with crisp interplay culminating with Winn getting a shot on target but only into Jones’ arms.

A final throw of the dice as Joel Brown-Bampoe drops back to centre half and Dunn moves up alongside Winn which gives Christou space to get a sight on goal but the shot skids wide.