IT just seems that the problem with potholes in Thurrock just do not seem to be going away.

Last year, the deputy leader of the Thurrock Conservatives, cllr Shane Hebb promised “By 2018, every pothole will be filled”.

But as we enter the second month of the year, it appears that the prblem just won’t go away.

On Wednesday night, Conservative Blackshots councillor, Ben Maney presented a petition at Thurrock Council as residents in Long Lane appeal for potholes to be filled. 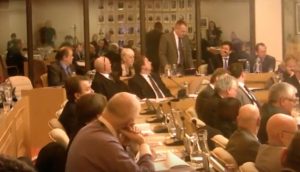 Here is a reminder of what cllr Hebb promised.