When Billy Graham came to Thurrock

US evangelist Billy Graham – one of the most influential preachers of the 20th Century – has died aged 99.

Graham became one of the best-known promoters of Christianity, beginning his worldwide mission in large arenas in London in 1954.

Here is a short film when he departed from Tilbury Docks in 1954.

Our thanks to our good firends at Transformation Thurrock for signposting the film to us.

He died at his home in Montreat, North Carolina, a spokesman for the Billy Graham Evangelistic Association said.

In a 60-year career, he is estimated to have preached to hundreds of millions of people.

Graham reached millions of them through TV – the first to use the medium to convey the Christian message on that scale. 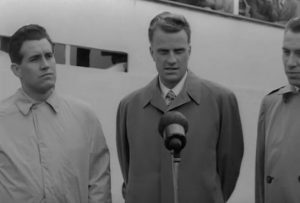