Man charged with careless driving after car collides with building.

ESSEX Police received reports of a collision in Broadway, Grays, at around 3.45pm yesterday (Sunday, March 4).

Officers received a call after a car was in collision with a building with no reported injuries.

We attended and reported a 54-year-old man from Pitsea for careless driving.

Ambulance Service: “We were called by police but were not required at the scene-no injuries reported and no need for ambulance.

The management company for the block of flats is Griffin Residential.

A spokesperson has confirmed that none of the elderly residents from within the flats was injured.

YT has received a report that a car has crashed into a house in Grays.

From a photograph received it appears that the car has hit a house at the Broadway corner in Litte Thurrock in Grays.

Emergency services are on the scene.

YT has contacted emergency services to establish if anyone has been injured. 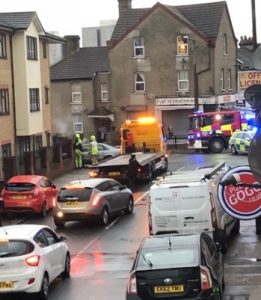