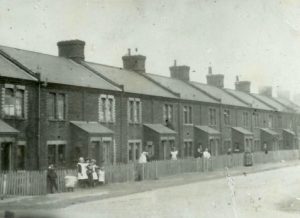 FOR our February meeting we welcomed back Linda Rhodes, now retired from her post at Valence House. She gave a detailed and interesting illustrated talk on Creekmouth, a village two miles south of Barking where the River Roding (aka Barking Creek) meets the Thames. It was an isolated village with a pub named The Crooked Billet built in the
18th century and two gunpowder magazines – a self-contained community. Ships waited there before making for London, also the fishing smacks. It had a reputation as a haven for smugglers, Customs officials using an old hulk for spot checks. The Battle of Creekmouth took place in 1747 when barricades were formed against the press gangs.

In the 1850s Creekmouth expanded, with new fertiliser and chemical factories built by John Lawes. He built houses for his workers, later incorporating a school and mission church. 1878 saw the Princess Alice disaster take place there. She was a pleasure ship which collided with a collier, with a loss of over 600 lives. Confusing traffic regulations were blamed and the few survivors were taken to the local school and mission church.

It was thought that Creekmouth was a healthy place, free of smallpox in 1888, maybe the inhabitants were protected by breathing in the fumes from the chemical works. Dampier’s Dock was named after sea captain, author and explorer William Dampier. At one time Alexander Selkirk was a crew member, his shipwreck becoming a source for Robinson Crusoe. The village also saw some excitement, a whale being landed in 1891 and was exhibited in London.

A snapshot of the village in the 1911 census showed people came from all over the country. There were large families with lodgers, with various occupations including Handley Page, aeronautical engineers (the first aircraft company in Britain, established in 1909). There was even a man who skimmed fat from the river surface and sold it – hopefully not for human consumption.

In WW1 three local men died, one having a road named after him. Barking people came for a day out at Creekmouth beach, by the power station, opened by George V and Queen Mary in 1925; it closed in 1981. On 31st January 1953 the village was inundated in the east coast floods. Thankfully no-one died and people were evacuated, some being taken to the local police station.

By 1954 there were still no proper facilities in the houses which were also deemed to be too close to local factories and were demolished in 1962, tenants being rehoused in the nearby Thames View Estate. The school building survived and in 1989 was sold to a demolition company for their headquarters. In 2004 the Creekmouth Preservation Society landscaped the area around the flood barrier (erected in 1982) and The Crooked Billet is now a restaurant. Some 2800 houses are to be built on the site, complete with a railway extension – a new phase for a lost village.

Our next meeting is at 8.00pm at the Adult Community College, Richmond Road, Grays on Friday 16th March when our illustrated talk will be Gardens in Essex, by Neil and Linda Holdaway. Visitors are welcome.

Russell Brand calls on Thurrock Council to save the Thameside Theatre