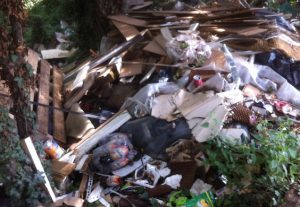 CRITICS have warned Thurrock may suffer a surge in fly-tipping as a result of stringent new controls about to be enforced at the borough’s main community tip.

From next month residents wanting to use anything other than a family car to take rubbish to the tip at Linford Household Waste and Recycling Centre in Buckingham Hill Road near Stanford-le-Hope, will have to apply for a permit to use another vehicle.

Though permits are free, it could take up to four weeks for a pass to be granted and that, say opponents of the scheme, means anyone who hasn’t made plans might turn up with a vehicle at the tip and be waved away – with the likelihood materials might get dumped illegally.

Under the ruling Conservative administration’s flagship ‘Clean It, Cut It, Fill It’ policy strict new rules have been put on vehicles allowed to turn up and use the facility without a permit.

Vehicles without side or rear windows – for example, a Transit van, will not be allowed, nor will flatbed vehicles, pickup-style vehicles and sign-written vehicles. Large family cars, from which seats have been removed, will also not be allowed and even trailers pulled by family cars are now outlawed!

Only one permit is allowed for each household. You can apply to replace a lost permit, but only once each year. If you replace your vehicle, you will need to obtain a replacement.

Portfolio holder for environment, Cllr Aaron Watkins said: “Our ‘Clean it, Cut it, Fill it’’ initiative continues to make residents proud to live in Thurrock.

“Providing a household waste and recycling centre is a key element in keeping our borough clean and tidy and importantly providing residents with opportunities to recycle items that they wouldn’t ordinarily place in their household bins.”

Thurrock Labour group leader Cllr Oliver Gerrish is one of those who thinks the idea is ill-conceived and said: “I am extremely concerned that this new scheme will result in a surge of fly-tipping across the borough. If residents have the right to use the tip, we should make it easy for them to do so.

“Anything that stops waste being easily disposed of makes it more likely that we will see rubbish piling up in the streets and alleys of Thurrock. We certainly shouldn’t do anything that makes the problem worse.”