MARCIO A Sa Peixoto was selected by Amazon for an apprenticeship in Tilbury through its apprenticeship programme and now works at the local site as an RME (Reliance Maintenance Engineer) apprentice. 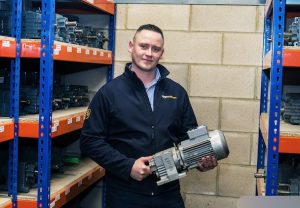 Marcio started his course in September 2017 on a programme of study at the EFF training centre in Aston, near Birmingham and work-based assessments at the site in Tilbury.

Gabor Nandori has been working at Amazon for nearly ten years. He joined in 2008, working in inbound operation in the Marston Gate fulfilment centre in Bedfordshire. Gabor undertook a number of different roles within the centre before joining the engineering

During his time as an Apprentice, Gabor worked in numerous Amazon fulfilment centres across the EU where he made a huge impact in rectifying automation problems especially at launch sites such as Madrid and Coalville. On completion of his Apprenticeship Gabor was successful in moving into a Level 4 salaried role as a Controls Systems Specialist and he continues to have a huge impact on the success of the engineering team he works in. He is now based at Amazon in Tilbury.

Speaking on the apprenticeship, Gabor said: “The Amazon Apprenticeship scheme was a great opportunity for me and I`m glad I took this path to secure my future as an automation engineer. The skillset and training provided allowed me to expand my knowledge in IT and controls and made me a better engineer.”

Speaking on the apprenticeship, Marcio said: “To be honest, engineering wasn’t always the career path that I thought I would choose. At school, I considered many different options but when I was doing my GCSEs, I started to become interested in engineering and that’s where it all started for me.

“After leaving school, I studied at college in Dagenham on the BTEC level 3 course in engineering. I did that for three years and then joined the Amazon apprenticeship programme. I guess I joined Amazon because I had a really strong belief that the company would match the very high goals I’ve set for my career and the apprenticeship programme seemed like the ideal way for me to work with such a prestigious company.

“Since joining the programme, I feel like I’ve learned so much both inside the classroom and on the practical assignments at the site in Tilbury. If I had to choose the most important thing I’ve learned so far, I’d have to say that it’s been so important for me to get a glimpse into what makes such a successful company tick from an operations perspective. The programme has also taught me that if you work hard, you’ll be rewarded and that’s been an important lesson to learn.

“One of the main benefits of the programme, for me, is the opportunity to travel while I’m learning. I live in Dagenham but each week, I travel to Birmingham to study and that’s been liberating for me. It’s great to have such flexibility from the team at Amazon to be able to do this and it’s been a great experience so far.

“I know that at the moment, lots of people will be considering applying for an apprenticeship programme. I say go for it – it’ll be one of the best decisions you’ll ever make. When I applied for the role at Amazon, I had no idea that I’d even be considered, let alone be successful, and it’s been one of the best things I’ve ever done. You’ll never look back.”

Amazon’s Apprenticeship schemes are designed to suit candidates with a range of experience, from those with life skills to school leavers who are 18+ with GCSEs or A-levels. *

Anyone interested in finding out more information about the Amazon apprenticeship programme can visit www.amazon.jobs/apprentices

A CALL has been made by the leader of Thurrock Council's Labour group for all council seats in the borough to come up for re-election later this year.

A Romanian man has appeared in court facing manslaughter charges after the deaths of 39 Vietnamese migrants found suffocated in a sealed lorry trailer reports the BBC.

IN the last week, 20 people have been convicted in court for their part in the disruption caused in the Thurrock district in April last year.

A CALL has been made by the leader of Thurrock Council's Labour group for all council seats in the borough to come up for re-election later this year.

A Romanian man has appeared in court facing manslaughter charges after the deaths of 39 Vietnamese migrants found suffocated in a sealed lorry trailer reports the BBC.

IN the last week, 20 people have been convicted in court for their part in the disruption caused in the Thurrock district in April last year.