East Thurrock’s Mick and Margaret win Volunteer of the Month

Mick has been part of the club since 2002 and now, at 76, still spends most days there looking after the pitch, carrying out all the routine maintenance jobs including electrical and plumbing repairs, carpentry and other jobs.

Mick works tirelessly, for nothing other than enjoyment. His wife, Margaret is instrumental too on match days with her hospitality, warmth of welcome and kindness to match officials and visitors.

Mick’s also a fundraiser, running the 50-50 competition and selling programmes on match days.

Despite suffering a mild stroke, he checked in to make sure the club were OK whilst he was recovering and still attended matches. 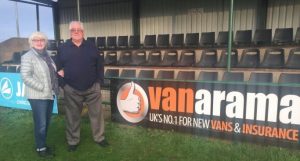