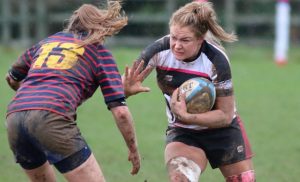 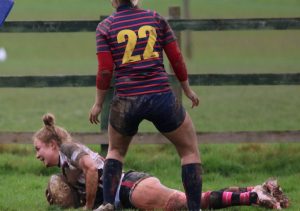 ON a pitch that might have done well as a bog snorkelling venue, it never stopped raining throughout this game, never particularly hard, just a constant drip drip. However, that didn’t phase the T-Birds.

Needing just a point of any sort to secure a 4th title in the last 5 Championship Seasons, the T-Birds, with the pressure off, finally clicked into something like top gear.

Playing multiphase Rugby and pulling a willing Trojans defence from side to side, the T-Birds created and exploited gaps all over the park.

In a 20 minute spell, playing the best rugby of the season despite the horrible conditions, Hanna Duffy, Siobhan Longdon-Hughes and new Scottish International, Jodie Rettie all crossed the try line to ratchet up a 15 point lead.

Trojans defended well for the balance of the first half, but trapped in their own half, the constant pressure gradually wore down the defence.

Into overtime, Tyler broke through for the 4th try of the game and the half ended 0-22.

Again Trojans lifted their game for the second period, but with the T-Birds playing flowing rugby despite the conditions, the 5th try and bonus point came to Sally Tuson returning from a long injury break.

With the game won, the bench emptied and the T-Birds cruising, Sophie Tyler closed the game out with a fine individual run to bring the score to 0-32.

Unfortunately, the game and possible trophy mean nothing because the RFU have closed off the Women’s Premiership and there is no possibility of promotion.