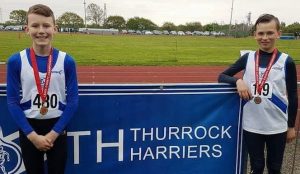 THURROCK Harriers were well represented at the Essex County Pentathlon Championships on Saturday (28th). Competing against athletes from across the county Thurrock won a total of three Gold, three Silver and three Bronze medals as well as a host of personal bests.

The U20s competition saw Liam Chivers win Bronze with a pent pb of 2211 and Jess Whitbread, after a two year break from Combined events, win Silver with a pb of 1634.

In the U17s Theo Adesina won Gold with a pb of 2656 and was joined on the podium of Daniel Ogutuga who took Bronze with 1775 points. Ruby Bridger won Gold for the girls with 3183 points, Ruby’ s 80mH in 11.69s equalled the club hurdle record for U17W.

In the U13s competition Jack Warren won Gold with a pb of 1181 with Maison Carpenter-Prout in Silver position with pb of 1171. Rosie Townley won Silver with a pb of 1826.

The club is very proud of all it’s athletes. For many of the younger U13 athletes this was their first taste of a multi-event competition; Samuel Bernard, Orea Adepegba, Olivia Vickers, Taibat Owosho, Sophie Matthews, Shannon Beveridge, and Summer Carpenter-Prout