Chris Cohen retires from football at the age of 31 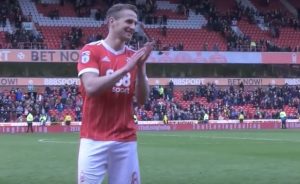 Cohen, 31, who returned from three knee injuries during his 11 years at Forest, came off the bench to feature for just the third time this season.

Chris is originally from Thurrock. He attended William Edwards School. He made his debut for West Ham United at the age of sixteen. He was the youngest player for over 80 years.

He went on to play for Yeovil and then joined Nottom Forest in 2007, where he made more than 300 Forest appearances.

Forest boss Aitor Karanka said Cohen may remain at the club as a coach.

“He wants to be a coach, so I think he will stay with us because we need to look after our people,” Karanka told BBC Radio Nottingham.

The Spaniard said ensuring Cohen – who made his senior debut as a West Ham player in 2003 – finished his career by playing in front of Reds fans at the City Ground one last time was a poignant send-off for a Forest favourite.

“I knew how important he is here, how much the people like him and the best way to say goodbye is on the pitch,” said Karanka.

“For me today, it’s been the nicest thing. Chris is one us.”