ROM, Europe’s only historically listed Skatepark, has received £59,300 from the Heritage Lottery Fund (HLF) for an exciting project, Rom Skatepark: Celebrating 40 Years of Rad in The London Borough of Havering. Made possible by money raised by National Lottery players, the project focuses on the history of Rom Skatepark and it’s fans and users over the past forty years.

The project, starting in May 2018 and running for 12 months comprises:
A two day celebratory BMX and Skate Jam on July 14th and 15th
A unique one off street art piece by renowned international artists “The London Police”
The production of a documentary film : Rom Boys: 40 years of Rad
A new interactive website and digital archive at www.romskatepark.co.uk
Filmed interviews of key figures in Rom’s history
Skate deck building and design workshops by The Far Academy
Reminiscence lecture by skate historian Professor Iain Borden
A two week exhibition at Havering Museum in March 2019
Park works and maintenance 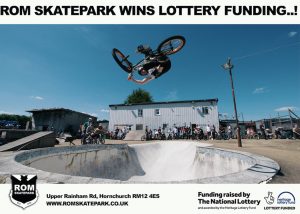 There will be multiple opportunities for volunteers throughout the summer and we encourage as many people to get in contact with us as possible to really bring the park alive for its 40th anniversary celebrations.

Agency East, is a Community Interest Company that specialises in delivering projects that have a positive impact on business and communities.
Rom Skatepark is unique in that it was the first skatepark in Europe to achieve listed status and is one of the oldest skateparks anywhere in the world.

Commenting on the award, John Greenwood, Rom Skatepark custodian, said: “We are thrilled to have received support thanks to National Lottery players and are confident the project will go some ways in keeping Rom relevant to many people