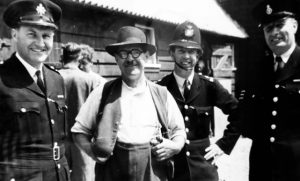 On Thursday, May 3, Wilf, who joined Essex Police during World War II, attended the ceremony organised especially for him, to mark his milestone birthday.

He was collected in style by the Chief Constable’s uniformed staff officer, who chauffeured him to the headquarters in Chelmsford.

Wilf and Mr Kavanagh were joined by new recruits Pc Lily Palmer and Pc Alex Burgess to share their experience of working for Essex Police over tea and biscuits.

Wilf retired as a Chief Superintendent in 1977. He joined Essex Police more than 80 years ago in 1938 during World War II and was first posted to Grays and Tilbury which suffered heavy bombing during the war. The deafening result of this still affects Wilf to this day.

In celebration of Wilf’s years of service, Essex Police Museum has commissioned a display consisting of information about Wilf’s career and police memorabilia from the World War II era.

During the special ceremony, Wilf, Mr Kavanagh, Lily and Alex shared stories of their time serving as a police officer in Essex. Wilf spoke fondly of his memories of policing during the war. He told one story about collecting a prisoner from the navy whilst serving in Maldon.

He attended the location requested by the navy and was unable to see a boat. He waited for a few moments before a submarine appeared from the depths of the River Blackwater containing a prisoner who Wilf locked up in the cells with the assistance of navy servicemen.

Wilf also shared stories with Mr Kavanagh about previous Chief Constables and what it was like to serve underneath them. He spoke warmly about his time serving in Grays, Tilbury, Maldon and Chelmsford.

At the ceremony, Wilf stated that he felt honoured to be invited to join Mr Kavanagh and was overwhelmed by the celebrations.

Mr Kavanagh, who handed Wilf a birthday card, said: “It’s an honour to welcome Mr Partis back to Essex Police Headquarters having served for both our country in the World War II and our county until 1977.

“I felt humbled to have shared stories about serving for Essex with him and our two new budding recruits. Our display in the museum will celebrate Mr Partis’ career for many years to come.”