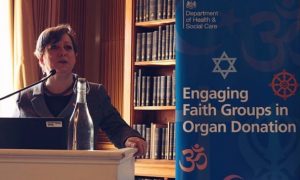 THURROCK MP, Jackie Doyle-Price has appealed to different faiths and ethnicities to help increase the number of organ donors.

Speaking at the National BAME Transplant Alliance, Jackie Doyle-Price told Muslim, Christian, Jewish, Hindu, Sikh and other faith representatives that almost three in ten people currently in need of a transplant are an ethnic minority.

“Organ donation is a gift, with over 50,000 people alive in England today thanks to the selflessness of families and individuals who are willing to donate,” she said.

“But the injustice is that if you are black, Asian or from another ethnic minority you have less chance of receiving an organ than white patients – all for the lack of match donors willing to come forward and donate.”

The minister said people from ethnic minority backgrounds would, on average, wait six months longer for a transplant than a white person, and asked the audience to “make a real difference – just 100 more donors can save 228 lives”.

She added: “I am calling on you to use your influence to dispel the myths and encourage your communities to give the gift of life.”

Doyle-Price’s call follows the Government’s recent consultation into opt-out organ donation which saw over 17,000 responses, a significant proportion of which came from ethnic minorities.