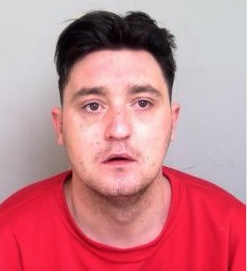 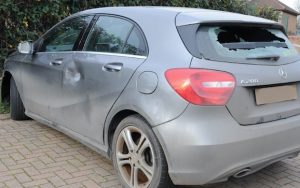 A MAN has been jailed for three years and four months after shooting a car with a shotgun in Tilbury before attempting to set it alight.

Curtis Lodge, 30, of Buckles Lane, South Ockendon, received three years and four months for having a loaded shotgun in a public place and two years, to run concurrently, for attempted arson at Basildon Crown Court on Wednesday, May 16. He admitted the offences on the day.

At the hearing, Abbie Woodham, 27, of Lime Close, South Ockendon, was found not guilty of possessing a loaded shotgun in a public place and assisting an offender.

A police spokesperson said: “At around 10.15am on Friday, November 24, we received reports that shots had been fired at a Mercedes A300 in Albany Road.

Witnesses reported seeing Lodge running from the scene holding a long barrelled shotgun. We attended and found newspaper alight in the vehicle, which had been damaged by shotgun pellets being fired.

A car belonging Abbie Woodham, Lodge’s former girlfriend, was seen driving from the area, which we located in Lakeside area at around 10.50am.

“We arrested and interviewed Woodham before locating Lodge at a hotel in Weston Avenue, Grays, at around 3.45pm”.

Investigating officer PC Owen Clements, of Grays CID, said: “Lodge decided to take matters in his own hands by going armed with a loaded shotgun and then firing pellets into the car, after his attempts to set it alight were unsuccessful. It still remains unknown as to the reasons why he did this.

“The incident occurred in broad daylight with many bystanders who would have been terrified. I want to thank them all for their assistance.

“Their accounts, forensics evidence and report from a crime scene investigator with over 19 years’ experience, who confirmed the damage had been caused by a shotgun being fired, helped pinpoint him at the scene. Lodge will now have time to think about his actions in prison.”