The task was to play 18 holes of golf in 18 of the cricketing counties throughout the country, one hole to be played at each of the 18 courses to make up one of the largest composite courses ever played! 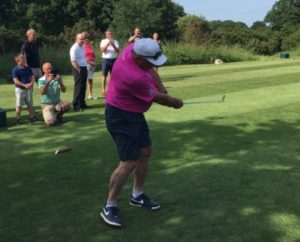 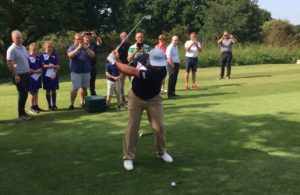 Transport between courses would be provided by helicopter and the entire day was supported by Sky Sports who will be producing a story of the day in the near future.

Sir Ian would be challenging Andrew “Beef” Johnston who was fresh off winning the US Open qualifying event held at Walton Heath 48 hours before. Originally scheduled to arrive at Orsett as their 10th hole at 13.05 delays were inevitable, but no one could have predicted what was to face them. Sir Ian arrived in style at 13.45 but there was only one helicopter? Beef’s machine had encountered technical issues and would not be flying, another machine was found, only to be grounded by technical gremlins!!

Finally whilst sipping a cool Gin & Tonic on the Club patio Sir Ian suggested the helicopter at Orsett be scrambled back to Staverton Park to collect Beef and camera crew. This gave Ian the excuse to sample a few of the club’s Gin’s from our new menu, he is somewhat known as a connoisseur!

After nearly an hour or so, numerous photo’s and autographs Ian was joined by Beef on the 12th Tee. A good sized crowd had stayed to watch the chaps play. Beef was obviously greeted by our younger members with cries of Beeeef!! It is obvious to see why he is such a popular figure as he greets everyone with a smile and a warm handshake, no photo or autograph is too much, a great example to all sportsmen.

Both tee shots were short of the hole, Beef hitting the front of the green and Ian catching the front bunker (it was noted there was no donation to the Lady Captain’s Charity!!)

Ian eventually making a four and Beef extending his lead with a three.

A great atmosphere with two fantastic sportsmen raising a massive amount of money on the day.