A TOTAL of seven people suspected of being involved in a London gang that runs a ‘county line’ drug dealing network to Suffolk were arrested in the early hours of Tuesday, 12 June in a series of Trident raids. 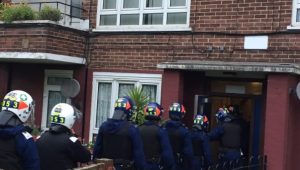 Warrants were executed by Metropolitan Police officers at six addresses, including five in Newham, as part of the operation. Three men were arrested.

As part of the same operation, one man and two women were arrested by Suffolk Police and one man was arrested by Essex Police.

The individuals arrested, aged between 19 and 39 years old, were arrested for conspiracy to supply class A drugs.

In addition to the arrests, a number of items were seized at the properties, including a stolen moped, a ten-inch hunting knife, a quantity of cannabis and a mobile phone believed to be the phone used for running the ‘county line’.

More than 80 officers from a range of units across the Metropolitan Police took part in the operational activity, including officers from Trident Central Gangs Unit, Newham borough, Territorial Support Group [TSG] and local borough officers.

The arrests were made as part of an intelligence-led, proactive operation targeting senior members of a gang in Newham believed to be responsible for a cocaine and heroin drug-dealing network from London to Suffolk.

Chief Superintendent Richard Tucker, Commander of the Met’s North East Command Unit, said: “This morning’s arrests demonstrate the commitment of the Metropolitan Police to reducing the level of violence in Newham and the wider East London area.

“Those who run ‘county line’ drug dealing networks are responsible for exporting violence to towns outside of London and we are committed to relentlessly pursuing and disrupting them. We believe the disruption of the drug dealing gangs could have a direct impact on reducing the level of violence in London.”