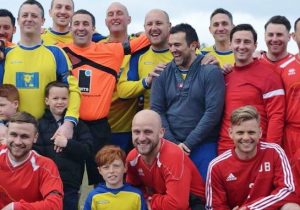 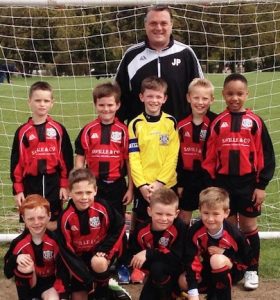 #CelebrateEssex promotes inspirational personal volunteer stories, motivating new faces to get involved and grow the grassroots community. Once nominations closed in June, a select group of footie dads were chosen for a Twitter poll to identify the monthly winner who’d receive a prize and extra public plaudits. Jason won the vote in front of two strong challengers.

A ‘Footie Dad’ is described as someone who offers support to their son or daughter before, during or after a game in any number of ways. They help to make sure their ‘star player’ gets to training safely, enjoys participating in matches and is encouraged to do their best. Kelly Plunkett believed Jason shows these traits so she nominated him to the @EssexCountyFA Twitter account.

Football has always been Jason’s passion in life, and he’s been involved in all aspects of the game: watching, playing, managing, training, coaching and even scouting. He started managing when he had to stop playing through injury at a young age. Then followed nearly 30 years in the Thurrock Association Sunday League and the Greene King Essex Veterans League on Saturdays.

He also started training the ‘minis’ at County Park YFC when a coach left so they could grow the club and bring teams through, running his son Oliver’s team. Oliver then signed for Southend United and Jason was unable to dedicate the time to his County Park responsibilities. However, he grew to miss coaching youngsters so he became involved in schools district football.

Jason will be looking to coach two district age groups in 2018/19 for Basildon and Billericay alongside Manager Billy Manners from Woodlands School. Being involved in the development of his son’s skills is important to him, and he said: “I became a ‘Footie Dad’ nine years ago, and my son started at an early age. From three years old he has grown up around football.”

“He was even kicking a ball before he could walk, crawling round the house! I just try to be there for him and support him for all the games he plays for his school, district, grassroots and academy teams. I give up most of my free time these days for my son as Southend United’s Youth Academy is a big commitment, training three times a week with games up and down the country.”

Jason has been part of one Essex’s most successful Sunday clubs – Ockendon Motor Spares who won the County Cup seven times, plus three with Little Thurrock Dynamos Veterans – but he knows what currently makes him tick: “I’ve lost count of the other titles and cups I’ve won, but being involved and supporting my son is the best feeling, seeing him enjoying the game he loves so much.”

He also has a word for anyone thinking of offering their spare time for grassroots football: “You don’t need to have experience as my father-in-law helped me until I stopped. Without volunteers then teams, and even clubs, disband so just try it please. You will be surprised how rewarding it is.”

And Jason also has advice for parent or guardians supporting their child: “Just let them play and enjoy the game. Ask them the questions, don’t tell them the answers. Support them and just be there for them. You need to tell them they’ll make mistakes and they’ll be rejected, but football is all about opinions and it’s about them enjoying and playing the game wherever it may be.”

Find out more about the #CelebrateEssex Competition, or how to volunteer in grassroots Essex football, at www.essexfa.com. July is the month of the ‘Chairperson’ on Twitter @EssexCountyFA and information is also shared on Facebook by searching for ‘EssexFootball’.