ROMFORD Danny Reid went for a spectacular leap at Arena Essex at the weekend. 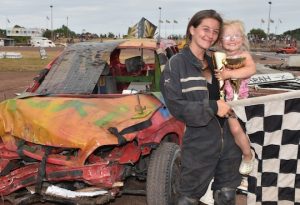 Reid was competing in the annual Caravan Race at the venue when he spotted the broken down car and caravan of John Harris at the end of the back straight on the first lap. Without lifting from the throttle, Danny attacked the caravan and used it as a launch pad to complete an airborne loop over the John Harris car.

The race was immediately stopped to check on Reid, although he was able to clamber free to the cheers of the sizeable crowd.

The restarted race faced another stoppage when Iain Knight went flying into some home straight wreckage and marshals lost sight of a driver or two amongst the debris. After an anxious moment, Brad Turners face appeared through a small caravan window and he managed to squeeze himself through the small gap to safety!

Having been caught up in that particular incident, Jodie Cheeseman’s car and caravan was dragged free and she had a clear run from that point on, although she became a little pre-occupied with Jack Coveney up on the pit turn, wrongly believing that the race was already over and it was the Destruction Derby. Nevertheless after Coveney expired, Jodie was persuaded to complete the final few yards of the race and take the victory, along with the last remaining car trophy too.

The caravans finished a full day of PRI Banger racing which was perhaps a little more subdued than usual, with some racers predictably saving their cars for the Caravan event at the end.

Jake Sheldon and Richard John won the qualifying heats, John belying his ‘Mr Grumpy’ nickname having finally achieved the race win he had been searching for, over the best part of a decade. James Powell was another first time winner in the consolation event.

The final was the liveliest solo race of the day with Sheldon and Powell early victims of a big turn one pile up, although Powell continued and reached the finish before Jack Coveney buried him in the wall after the flag.

In a day of first time winners it was apt that Teenager, Tyler Ivins took the final win, his first at Arena Essex since moving up from the Junior classes.

Rob Merritt was in good form amongst a good entry of Lightning Rods. He won both heats before being narrowly defeated by Mark Collins in the final.

The Stock Rods provided the race of the day with Robert Taylor narrowly holding off the entire grid of cars in the second heat. Matt Rowling had earlier made the outside line work for him on the way to victory in the first heat, however it was Gary Hicks who made the break in the final and couldn’t be caught, despite the bext efforts of second placed Chris Harvey.

Finally the Stock Cars saw a heat and final victory for Nathan Roberts whilst Steve Davies won the other heat.

The next action at Arena Essex is on 5th August when the Mini Stox and Lightning Rods contest their Essex Championships, with National Bangers and 2L Stock Cars in support.