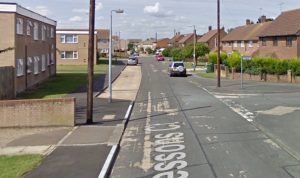 A MAN has been convicted of manslaughter after killing another man in a drugs-related incident.

A drugs exchange took place in Queen Elizabeth Drive, Corringham, but they became involved in a fight, during which Mr Dube was stabbed 25 times in his body and legs. A court was told the fight may have started after the victim demanded Morgan’s property.

Morgan then drove off, leaving him in the street.

Emergency services were called shortly before 7.40pm but Mr Dube died at the scene, despite the efforts of paramedics.

Witnesses reported seeing a black BMW drive off, colliding with a parked car as it left the scene.

Mr Dube’s cousin – who was unaware of what had happened – had called his mobile phone shortly after 8.15pm and was answered by an unknown man.

The BMW was also traced as having been in the Corringham area at the time of the attack and was found near his home. It had damage to its front offside bumper and wing, consistent with being involving in a collision.

Morgan, 24, was arrested and later charged with murder. He denied the charge and stood trial at Basildon Crown Court on July 2.

A jury found him not guilty of murder today, Tuesday, July 24 but guilty of manslaughter.

Sentencing has been adjourned until tomorrow, Wednesday, July 25.