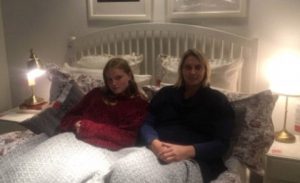 IKEA offered more than 200 people beds in their store overnight after a crash on the M25 left motorists stranded.

There were huge tailbacks on Monday after two lorries crashed between junctions 30 and 31.

Many drivers were stuck in their cars for hours on end while those close enough to Ikea in Lakeside were offered a bed for the night.

It’s thought no one was seriously injured in the crash but the motorway was closed overnight and did not reopen until 5.45am this morning.

One man named Fergal Parkinson praised the Ikea Thurrock store for allowing his wife and daughter stay in the store ovrenight.

He told the BBC that around 200 people were offered beds for the night.

He captioned the photo of them and wrote: “Good on @IKEAUK letting people, including my wife and daughter, stay in their bedrooms overnight after the M25 accident.”

Another stranded passenger named Natasha shared a snap of her other half face down in an Ikea bed and wrote: “Glad to finally have our room. @IKEAUK”.

She later added that they were stuck in the store until 9.30pm before they were able to get back on the road.