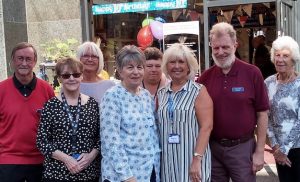 The shop, which sells a range of home ware, books, CD’s, electrical items and furniture, was opened in August 2008 by the then Mayor of Thurrock Cllr John Everitt. Continuing in this tradition the guest of honour was the current Mayoress of Thurrock Barbara Rice who cut an Anniversary cake and drew the raffle, which raised just over £200 for the Hospice.

Mayoress Cllr Barbara Rice said that she was ‘’delighted to have been invited to join the celebrations and have an opportunity to meet and thank all the wonderful people, especially volunteers, who work so hard raising money for the Hospice. She commended the Hospice for all the care and support it gives to the community and congratulated the shop staff on their 10th Anniversary’’

Among those joining in the celebrations was Anne Danyali. Anne has been managing the Shop since it was first opened, initially full time and more recently in a part time capacity with co-part time manager Shelley Hull. 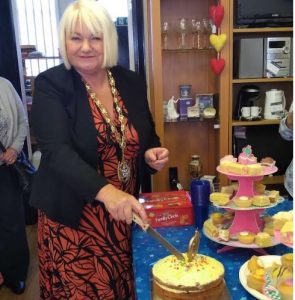 Anne said ‘’it’s our customers, volunteers and people who donate items for sale who have really made being in this shop such a pleasure. It’s such a friendly place and a real community hub with people of all ages calling in. Hardly a day goes past without someone saying that they know someone or have known someone who the Hospice has looked after and it is always followed by them saying – ‘I don’t know what we would have done had the Hospice not been there’ – That for me has been my inspiration on days when the going is tough. I’d like to say a massive thank you to everyone who has supported this shop over the past 10 years – with your help and generous, loyal, support we have been able to help keep St Luke’s Hospice services running’’.

St Luke’s Corringham shop is one of 10 charity shops run by the Hospice located throughout Basildon and Thurrock. Income from the shops help towards the £15,207 a day the Hospice needs to raise to keep services running.
Services provided by St. Luke’s Hospice include In-patient Unit, Day Hospice, Hospice at Home, OneResponse (24/7 support, assessment and advice) as well as community Adult Counselling, Specialist Children and Young People Counselling Services and Carer’s Support Service.