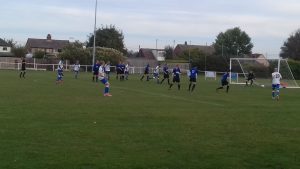 Redbridge came through their all-ESL Vase tie with Southend Manor to book their 2nd Round berth. Larry Asare and Calvin Poku had fired the Motormen into a 2-0 half time lead, but Manor pulled one back five minutes into the second period as Nathan Dewberry reduced arrears; however a brace from Jack Stevenson ensured that Redbridge secured victory, meaning that at least two ESL teams will be playing in the 2nd Round. Enfield will at least be in the draw but they have to settle their tie with Little Oakley in on Tuesday: the replay required after their game finished 2-2. Reece Barrett fired Enfield into a 22nd minute lead but Stephen Polley levelled up in the 54th minute and then struck again in the 71st minute to hand Little Oakley the lead.  But Enfield replied after a ball played across the six-yard box was turned in by a Little Oakley player. Extra time saw some late drama as Enfield were denied a penalty in the final minute and then had to do some last ditch defending to prevent Little Oakley grabbing a very late winner. Takeley crashed out after Wodson Park came away from Station Road with a 2-0 win, while Luke Preedy, Chris Blunden and Jason Goode all got on the score sheet for Leverstock Green, ending Sawbridgeworth Town’s Vase campaign with a 3-0 defeat. West Essex hung around until Sunday, then Godmanchester Rovers turned up to spoil the day with a 2-1 victory. Simon Unwin provided the visitors with a 12th minute lead, but Nick Walk replied on the half hour and despite a valliant effort from the Stags they were knocked out by Buster Harridine who scored the winning goal fifteen minutes from time.

League action saw the leadership taken by Stansted after they beat bottom-placed Barkingside 2-1. Connor Hammond handed the Airportmen a 26th minute lead via the penalty spot, but Side were level in the 74th minute as Warren Kayembe found the target. But Moses Carvalho then popped up four minutes from time to score the winner and with it securing not only the three points but the lead as Hullbridge Sports were held to a 2-2 draw by Leyton Athletic. Sports twice had the lead, as Luke Hornsley (15) and Jimmy Cox (55) struck but Leyton Athletic have Dwade James in their line-up and the second highest scorer in the league notched twice, salvaging a  point for Leyton Athletic and knocking Hullbridge off their perch. Goal difference now separates the top two. Saffron Walden Town are up to fourth after a 5-2 win over St. Margaretsbury. Lewis Francis opened the scoring for the Bloods in the 16th minute via a penalty and the tally included a brace from Dan Trendall plus a goal apiece from James Solkhon and Craig Calver. St Margaretsbury scored their goals via Charncey Dash and David Greene. Sporting Bengal United shared a point with Hoddesdon Town as Steven Carvell’s 80th minute equaliser cancelled out Courtney Clay’s 45th minute strike for Hoddesdon who are now fifth in the table, with Sporting Bengal three places lower in eighth. And in the battle of the basement boys it was Stanway Rovers who took the honours as Teddy Nesbitt and Toby Blanche provided the goals that secured the important three points. Luke With supplied the Hamlets goal but they remain in the bottom two after this defeat.