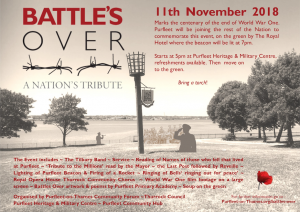 PURFLEET Heritage & Military Centre, Purfleet Community Hub & Thurrock Council are organising a joint community event to commemorate the centenary of the end of World War One on 11th November. This is part of a national celebration where over 1000 beacons will be lit.

The forum obtained funding from the councils CEDF grant to restore the Purfleet Beacon which has been leaning for many years. The base when it was removed had rotted away. When it is returned in time for the event it will be set in concrete under the ground

The evening will start at 5pm at the Heritage Centre for tea and coffee. There will be a display of paintings depicting WWI from Purfleet Primary School. From there move onto the green by the Royal Hotel. Tilbury Band, 25 piece whose centenary is next year will play music from the period.

After a service and reading of names of the 26 soldiers who fell during the war who lived at Purfleet the Mayor will read out a ‘Tribute to the Millions’. Following this will be the Last Post and Reveille. At 7pm the beacon will be lit and a rocket fired from near the Heritage Centre. At 7:05 bells from churches and cathedrals nearby will ring, ringing out for peace. Purfleet does not have its own bells, but have invited Thurrock Community Chorus to round off the celebrations.

There will be 20 x WWI silhouettes on the green up to 8ft high between the beacon and river giving a moving backdrop to the event. The board for these was kindly donated by James Latham Ltd in Dolphin Way.

On the green will be WWI footage on a large screen and as it might be cold there will be soup on the green. The knitting group from the hub have made poppies that will be available on the evening. Ensign Bus will bring historic vehicles and hope to include their WWI battle bus. There will also be a vintage fire engine