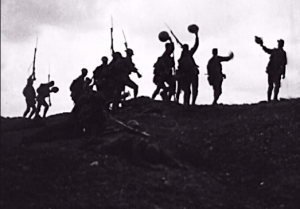 The Editor of the Grays & Tilbury Gazette wrote the following article in the issue published on Saturday, Nov 16th , 1918:-

“The news of the signing of the armistice was known in London at 10:30 on Monday, and a newspaper was purchased in Fleet Street containing the information at 10:35. From that time onward the intelligence rapidly spread. There was everywhere manifest a desire to cease work and spend the day as inclination suited – either in joviality, hilarity and song or in sober restraint, seeking for a relief of feeling in a church service or sitting quietly at home with the family. But, however expressed, the underlying sentiment was one of earnest thankfulness that the awful, devastating slaughter of the past four years had stopped and that some hidiious night-mare had released its murky hold upon us. The tasks of reconstruction were admitted to be fraught as much good or ill as those of war, and many looked anxiously ahead. For the moment, however, there was real joy in the deliverance. May we never forget those who have saved us from the horrors heaped upon the fair soil of France and Belgium. Except for casual destruction by airship or aeroplane our churches, monuments and public buildings stand where they did in 1914. The lovely pastoral countryside is unmarked by the mire and misery of war and is only changed where the trees have fallen victims to the neccessity of the hour. It is a great blessing, and we are living too near to the time to appreciate fully the deliverance whuch has been wrought.”

The Armistice Day celebrations in Grays as reported in the Grays & Tilbury Gazette dated November 16, 1918.

The morning of Monday (11th November, 1918) dawned as quiet as usual, though most people had a subdued air of expectancy. It was not long before various rumours got abroad, but for all that nothing definite could be learned, and all proceeded about their business quietly. No doubt the war had gone on so long that one could hardly realise there was a prospect of any other state of affairs. Yet as the hands of the clock approached the hour of eleven there was a sound which, if it had occurred in the days that are past–for ever, let us hope- would have sent all scurrying for cover. Far away from towards London could be heard the scream of hooters in every conceivable note and key. There was no mistaking what it was. Down the river bank travelled the din of jubilation, till every hooter and syren vied with each other in raucous sounds of joy. That awful instrument of torture, the syren at the Grays Electricity Work “whooped” and “whooped” continously, yet none led in terror. “It’s all over!”, “Peace!” were the remarks when people had time to speak Each looked at the other with pent-up feelings. The parish churh bell rang out briskly. The ships in Tilbury Dock added mightily to the tumult. Railway engines and motor-cars joined in, and as the trains ran through, the explosion of fog-signals banged out the joy of the populace. Nor did the noise die away easily; and amid it all the roar of what seemed to be minute guns could be heard reverbarating in the distance.
For some minutes there was little change- a few cheers and smiles, and that was all. Then suddenly flags shot out, and there was a general rush for bunting of every description. The shops were beseiged with purchasers. Streamers grew like magic across the road, and the town was soon gay with colour. And all were bent on celebrating a festival-the festival of Peace and Victory. For hours the air was rent with the ever recurring hooting and tooting of steamers and locomotives. Meanwhile the mid-day trains brought in their loads of many workers.

The workers in Tilbury Dock had “downed tools” at the first note of the syrens. So too had those in the riverside factories, and “General Holiday” took command of the opeations. The afternoon saw parading in every direction. Work girls and soldiers alike were gay with red, white and blue. All the latest songs, and all the oldest too, were called into requisition; and the trains passing through were full of lively crowds, singing and waving flags. Now and then a flag-decked motor-car would pass swiftly along, arousing cheers as it went.

So the time passed till night. The Co-operative Society’s clock, long doomed to silence by Dread Dora’s decree, was swiftly liberated and chimed the hours and quarters sedately as of yore.

Yet for all that there were two sides to it all, and amid all the joy; there were those with heavy hearts and there were those who struggled vainly to keep back the tears for those who would not return. In the hour of the Nation’s triumph those who had made the great sacrifice were not forgotten.
In the vening Grays High Street was crowded with merry-makers, and a free hand was allowed to the revelry. Bang went the giant crackers and the air was full of sulphurous smoke from the squibs and fireworks which went off in every direction. There had not been time to arrange the cleaning of the lamps, but what did that matter so long as there was plenty of red fire to illuminate the street? Now and again a rocket soared gracefully heavenwards, and Roman candles and golden rain lit up the street below. It was a great night; and though there was plenty of merriment, there was no horse-play nor overindulgence of any sort. Incidentally, the last queue of the war was a fireworks queue!
In the district the Orsett Church bells rang out a merry peal; while the news was received at Langdon Hills in a remarkable manner. Amid the distant sounds of London’s rejoicing could be distinctly detected the ringing of the church bells of the Metropolis.

At the Orsett Isolation Hospital flags were quickly forthcoming, and the wards duly decorated. Even the children patients each had their flag.

At West Thurrock there was plenty of life during the day, and in the evening too. The Vicar, The Rev. J.W. Hayes, held two thanksgiving services at Purfleet and at West Thurrock; there being crowdedd congreations. Subsequently bonfires blazed forth amid much jubilation.

A thanksgiving service was also held at Grays Parish Church by the Vicar, Rev. A.H.W. Seally.

The Vicar of West Thurrock, having prepared beforehand for the peace rejoicing, a quantity of tar, pitch and other inflammble stuff, sent out the village children to the neighbouring farmers and elsewhere, for faggots. These were piled on the church path to make a great bonfire. Then 200 whistles were served out to the boys, and as many more coloured fans and flags to the girls, large flags of the Allies were stretched across the streets, and all awaited the next move. Thanksgiving services were held, both at Purfleet and West Thurrock churches first; and at 7 p.m. (as the congregation came out of church), a mighty column of fire and smoke could be seen ascending from the pile of faggots; round after round of cheers went up from the assembled crowds as they celebrated the triumph of justice and truth. The downfall of oppression and wrong, the opening of a new era of peace, plenty and prosperity. At the conclusion of the West Thurrock thanksgiving service the Vicar came forward holding a great Union Jack in his hand, and addressing the young people present, said with them rested the peace of the future. This was a day never to be forgotten, and he hoped, for the sake of those brave fellows who fell defending this flag, those present would never see it sullied by injustice, oppression, or cruelty, but remain for ever a symbol of freedom, rightousness and peace.
At Stanford-le-Hope Parish Church the bells rang out a merry chime; and a largely attended service was held by the Rev. C.R.N. Burrows, Rector of Mucking, in the absence of the Rector, the Rev. J. Russell.