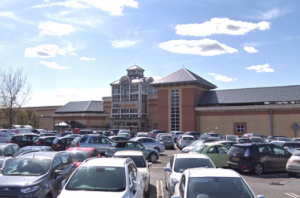 A NEW climbing centre is coming to Lakeside Shopping Centre after Thurrock Council agreed to back a proposal to transform a Pizza Hut restaurant and former BHS store.

The council approved the planning application on Tuesday, making way for a Pizza Hut restaurant on the upper floor of the Intu Lakeside Shopping Centre and part of a former BHS store on the lower floor to be transformed into a climbing centre operated by Rock Up.

The two units will be merged into one in to create a space high enough to accommodate a climbing wall.

The large BHS store closed in 2016 causing more than 100 job losses after the company went into administration. Since then, the unit the store once occupied has been left empty.

A report from a council planning officer acknowledges transforming the former store and restaurant into a climbing centre will mean the loss of 1,000 square metres of retail space but “no alternative user of this large premises has been found”.

It adds: “The mall already has a number of large anchor stores and it is not considered that the division of this large unit would be harmful to the vitality of the mall overall.”

The management team behind Lakeside have stressed they are keen to expand the shopping centre beyond its existing retail offering.

They are currently building a multi-million pound extention which will include a range of leisure facilities including a Hollywood Bowl bowling alley which opened last month, a Nickelodeon-themed family entertainment centre and a trampoline park.

Work on this extension began in 2017 and is expected to open in the summer.