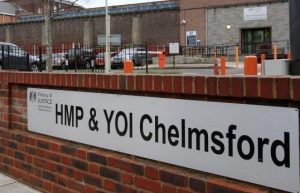 CHELMSFORD Prison remains one of the most dangerous and violent jails in the country, new figures have shown.

Figures released this week by the Ministry of Justice reveal that 635
attacks were recorded across HMP Chelmsford in 2018 – just eight other jails had higher numbers of assaults.

The number of assaults is up from 530 the previous year and is the highest number recorded since at least 2003, when modern records began.

The level of violence – the jail recorded a total of 414 assaults in 2016 – has been decried by the Prisoner Officers Association, which has said the Ministry of Justice needs to implement an investigation into the increases in attacks.

The rise of 45 per cent follows a 185 per cent increase in serious assaults on staff from seven incidents in 2016 to 20 in 2017, recognised by the jail, which has introduced a new model to improve closer working with prisoners.

But Jackie Marshall, of the Prison Officers Association, said jails are still trying to catch up after more than 7,500 officers were made redundant.

She added that the introduction of PAVA – a type of pepper spray – would help bring order back to the country’s prisons.

She said: “They just keep delaying it. A lot of the incidents we are having wouldn’t occur if we had PAVA.

“But the level of violence is just not acceptable and prisoners are not safe either.

Scanners which detect drugs on clothes and mail are up and running at 10 of the most challenging jails, Prisons Minister Rory Stewart announced in January. But Chelmsford is not one.

Ms Marshall added: “Spice is a major problem. And it is affecting the levels of violence.”

An assault is classed as “serious” if it is sexual, if the prisoner requires detention in hospital as an inpatient, or if injuries include things like broken bones, burns, stabbings, bites and black eyes.

The prison, built in 1830, has been used as a long term category B, a young person’s prison and a local prison since 1987. Two new houseblocks were opened in 1996 to relieve overcrowding.

Frances Crook, chief executive of the Howard League for Penal Reform, said: “Today’s figures reveal the sheer scale of the challenge to transform a prison system that has been overburdened and under-resourced for years.

“Change is happening, but it is like trying to turn around an oil tanker.

“I welcome the government’s efforts to reduce violence, including recruiting more staff to increase numbers and refresh the workforce, but fundamental reform is being stymied by the lack of parliamentary time available for legislation.

“I believe the will is there among ministers to make prisons safe and to reduce their unnecessary use, but in the end, lives can only be saved and violence reduced if the nettle of reform is grasped.”

The figures show that 117 of the assaults in 2018 were so bad that immediate admission to hospital was needed.

While the data shows an increase in assaults across last year as a whole, the number dipped towards the end of the year.

Rory Stewart, prisons minister, said: “Violence and self-harm in prisons remains unacceptably high, but I’m pleased at these early signs that we are making progress.

“It’s particularly encouraging to see a quarterly drop in violence, the first in two years.

“Our dedicated prison staff deserve enormous credit and I want to thank them all for their tireless work.

“There is still much to do, however, and no-one should underestimate the effort required to return long-term stability to the prison estate.

“We will continue to prioritise improving safety and security – making conditions safer for prison officers and prisoners, and ultimately protecting the public.”