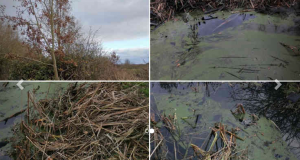 MYSTERY surrounds damage to to a local waterway which may have killed off a much-cared for animal habitat – prompting concern from Wildlife TV presenter and conservationist Chris Packham reports Thurrock Nub News.

Local wildlife campaigner and photographer Nick Lay has reported that trees and shrubs have been cut back or removed along an East Tilbury stream known as the Gobians Waterway.

For the past eight years the area has been carefully nurtured by Nick as a home for endangered water voles.

On Sunday (December 1st) he visited the waterway, which runs adjacent to the Black Track footpath, to find it has been decimated by machinery.

It is not known who carried out the work and Nick says it is likely the water voles, if not already killed, will not survive because of the destruction to their habitat.

He says: “All my efforts throughout the last few years carrying out my own surveys to help this endangered species was a waste of my time.

Nick posted his upset on social media and attracted a wave of support from other angry people, including Chris Packham who has tweeted his concern and asked to learn m,ore about what has happened.

Nick, who has reported the damage to Essex Police’s wildlife unit, the Wildlife Trust and Thurriock Council, added: “Water vole are in huge decline because of habitat loss, farming and the American mink.

“Over the last 20 or so years water vole numbers have dropped by 80 per cent.

“So habitats like the one we have along the Black Track are very important.

“But the habitat has now been destroyed. Trees and shrubs have been pulled out on the banks which are destroyed. Water voles need the banks to build their burrows.

“I must stress that it is against the Countryside Act to damage or destroy any water vole habitat.

“A survey should off been carried out first before any work was undertaken.

“My findings have been passed on to the wildlife crime officer and the Wildlife Trust and to the water vole conservation group.

“If anyone else has any information on this matter please let me know.”