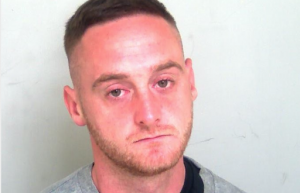 Paul Davis was part of a gang who burgled the homes in May this year.

But he was caught with the help of CCTV and forensic evidence.

A cottage in Nine Ashes Road, Stondon Massey, was broken into on Monday 6 May. Although nothing was stolen, the burglars caused substantial damage by forced open doors.

CCTV footage showed a silver BMW 5 series arriving shortly before the burglary. Paul Davis was seen getting out of the car.

The following day, burglars broke into a bungalow in Old London Road, Wickford, and stole £600 cash, jewellery, passports and paperwork.

CCTV showed Paul Davis approaching the front door and ringing the doorbell. He was wearing the same tracksuit as during the burglary the previous day.

On Wednesday 8 May another burglary was reported in Mountnessing Road, Ingatestone. The thieves had stolen 220 Euros.

Davis, 28, of Saladin Drive, Purfleet, was arrested on Wednesday 3 July.

He was charged with all three counts of burglary, which he admitted when he appeared at Basildon Crown Court on Tuesday 8 October.

He was jailed on Tuesday 3 December.

DC Frankie Cole, of Brentwood CID, said: “The invasion of your home is very distressing and I hope this sentencing gives the victims some comfort that Davis has been brought to justice for his crimes.

“These were well-planned, organised burglaries and he was clearly not working alone.

“Anyone with information to help us identify his accomplices is asked to call us.”

Call Brentwood CID on 101. Alternatively, contact the Crimestoppers charity 100% anonymously on 0800 555 111 or use the anonymous online form at Crimestoppers-uk.org

One Response to "Purfleet burglar who targeted three victims in three days jailed for four-and-a-half years."