Standing together for Holocaust Memorial Day 2020 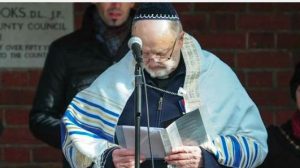 RESIDENTS in Thurrock can come together and commemorate Holocaust Memorial Day at a free public event.

On Monday, 27 January an hour-long service will be held at Palmer Memorial Gardens in High View Avenue, Grays, at 11am, to remember those who suffered in the Holocaust and in subsequent genocides. A number of borough schools will give readings and prayers, alongside councillors, Reverend Canon Darren Barlow, Stephen Silverman from Campaign Against Antisemitism and Elliott Porte from the East London & Essex Liberal Synagogue.

The annual Holocaust Memorial Day event, which this year marks the 75th anniversary since the liberation of Auschwitz-Birkenau, is a day for young and old to condemn discrimination, and celebrate a tolerant and democratic society. This year’s theme ‘stand together’ encourages communities to show solidarity with others facing prejudice.

Cllr Deborah Huelin, Cabinet Member for Communities and Central Services, said: “On Monday, 27 January, we mark Holocaust Memorial Day and two further important anniversaries: 75 years since the liberation of Auschwitz-Birkenau and 25 years since the genocide in Bosnia. This day is an opportunity to remember the consequences of the Holocaust and subsequent genocides to build a better future for the next generations.

“It is vital that we continue to reflect and commemorate as a community and support those facing hate, prejudice and persecution.”