THE slice of council tax which goes toward funding the police is set to increase by almost three per cent from April, it has been revealed.

At a meeting held in Thurrock, the Police, Fire and Crime Commissioner for Essex Roger Hirst outlined his plans to increase the slice of council tax that funds the police by 2.94 per cent. 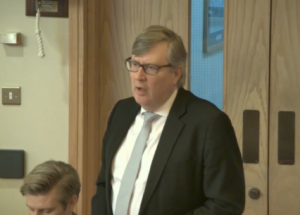 For Thurrock it will be on top of a 3.49 per cent increase.

Mr Hirst said: “From the point of view of local council tax, we can be more modest this year so you will only see a roughly inflationary uplift. We’ve raised the police pay by 2.5 per cent this year and the rise in local council tax will be 2.94 per cent, providing the panel approves it on February 6.

“This is below 3 per cent, a smidgeon over RPI but pretty much in line with inflation across the board.”

Mr Hirst said the 2 per cent investment would help address the issues raised in a government inspection, which concluded the service “needs to make improvements”.

The inspection highlights that the promotion of the “right values and culture” is inadequate and improvement is needed in getting “the right people with the right skills”.

Mr Hirst continued: “We need to make sure we are lifting our game in terms of training, we saw that in the feedback from HMICFRS inspection which took place last summer.

“The other key area to invest in is in fire protection so that is technical fire safety work, making sure businesses are well protected against the hazards they can be victim of or indeed cause of at times, so that’s the key area for the fire and rescue service.

“The third major investment will be investing in recruiting and retaining our on-call firefighters, then as a one-off investment we will be renewing the information and communications technology backbone of the fire and rescue service over the next 18 months.”

The announcement comes after a survey carried out by the commissioner’s office found that 66 per cent of the 2,035 people who responded said they would be prepared to pay more for policing.