Consider yourself invited to see the well known and loved ‘Oliver!’ 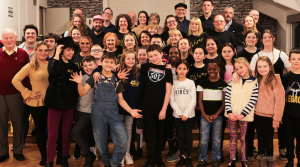 FOLLOWING the successful run of their latest production, Cinderella, TOPS on stage are delighted to be performing Lionel Bart’s musical adaptation of ‘Oliver!’ at the Thameside Theatre from Wednesday 18th March to Sunday 22nd March. Performances at 7.30pm, Wednesday – Saturday, and 14.30pm, Saturday and Sunday. 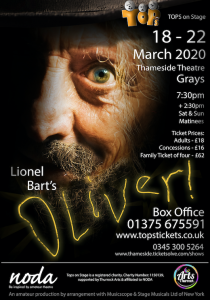 Lionel Bart’s ‘Oliver!’ is British musical, based upon the novel ‘Oliver Twist’ by Charles Dickens, which first premiered in the West End in 1960 and features the timeless songs ‘Food, Glorious Food’, ‘Where is Love’ and ‘As Long as He Needs Me’. The story takes you to Victorian England, where you meet orphaned boy, Oliver Twist, who was sold to a local undertaker but runs away. Picked up on the street by the Artful Dodger, Oliver is welcomed into Fagin’s gang of pickpockets. However, after Oliver is falsely accused of theft, he is taken in by the kind victim, Mr Brownlow. Fearing the safety of his hideout, Fagin asks the menacing Bill Skyes and the warm-hearted Nancy to bring Oliver back, threatening his chances of finding a true home and the love of a family.

TOPS on stage put on two musicals each year, at the Thameside Theatre, and their shows are cast by open audition and always welcome new members. As one of the last remaining Musical Theatre groups in Thurrock, they rely on the support of local residents to help keep the arts alive in this area. They always welcome new audience members and, with such a talented cast and crew putting on this show, we would love you all to join us. To book tickets visit www.topstickets.co.uk or by telephone on 01375 675591.