Residents rail against Orsett quarry plans with more than 1,000 objections 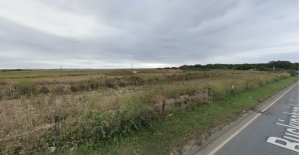 A PLAN to create a major new quarry in Thurrock has attracted fierce criticism from more than 1,000 residents who are urging the council to refuse planning permission.

The application has come from Ingrebourne Valley Ltd and proposes mineral extraction and processing at Orsett Quarry, as well as an extension into adjoining land at Walton Hall Farm in Stanford-le-Hope.

Ingrebourne explained in planning documents that “minerals can only be worked where they are found” and this “severely limits the opportunities for sites”.

It continued: “The proposed development is to reopen, operate and restore and existing quarry in the most sustainable way and to release an adjacent identified sand and gravel resource.”

The work is expected to be carried out over a 20-year period at which point the entire site would be restored back to farmland.

However, since the planning application was submitted in November residents have been pulling together to highlight their objections.

The council’s planning website now shows that more than 1,000 have now lodged complaints against the plans, many of these have been though a petition which states that work at the quarry will increase noise in residential areas, harm air quality and cause problems for local ecology.

In a separate objection, a resident from East Tilbury said the possibility of up to 300 extra HGVs being on the roads each day is “the last thing that the local resident need”.

They continued: “We have no means of exiting East Tilbury Village without experience heavy lorries, which means mud, damaged roads, verges and dirty pavement for most of the year. I, personally have had to replace three windscreens in the past five years. It is impossible to have a clean car if you live in this area.

“As residents we have suffered more than our fair share, and there is no way the current infrastructure can possibly warrant an increase in heavy traffic on our roads.”

The concerns about traffic have been backed by Highways England in a letter submitted to the council last month which said the authority has concerns about the daily number of HGVs mentioned in the plan and the lack of information about which roads they will be using.

The council’s own highways team also said they have “severe concerns”.

The plans are expected to be discussed by the council’s planning committee but due to the Covid-19 pandemic, meetings are yet to be scheduled.