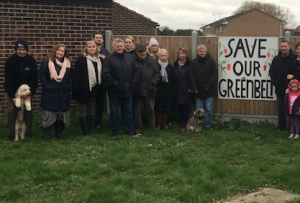 No house building on Green belt on the Little Thurrock Marshes.

ward councillor Allen Mayes calls on Thurrock Councils planning committee to follow the officers recommendations and reject the latest application for building on the Little Thurrock Marshes in Tilbury.

The residents of Thurrock Park, Little Thurrock and Grays are against housing development on this land and they must be listened to.

This planning application should not only be rejected on its own merits, it should be rejected due to the fact it would set a dangerous precedence in future green belt applications. It would endanger the countryside across the borough with very limited defence against future applications no matter how large or impacting.

I found it difficult to have sat in the public gallery at the previous planning meeting and hear poor reasons behind recklessly voting against the recommendations, which included housing for Tilbury 2 workers, whilst those same members will fight against planning applications within their own wards. You cannot have favouritism as to where things are built and it’s highly hypocritical to act in this way.

“I urge the planning committee to do the right thing, follow the officer and legal advice and reject the planning application on 8th June.”