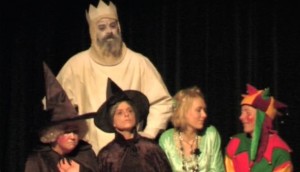 For those who are unfamiliar with Terry Pratchett’s ‘Wyrd Sisters’, it is a patchwork of fantasy, reality, witchcraft and royalty, all sewn together with plenty of Pratchett’s comedic wit.

Loosely based on Shakespeare’s ‘Macbeth’, the story of the ‘Wyrd Sisters’ follows three witches on their journey to save the Kingdom. The King has recently been killed by Duke and Lady Felmet, and it is up to the witches to restore the true heir to the throne and stop these murderous villains destroying the Kingdom.

Admittedly, my brief synopsis does not do justice to what was an incredibly complex and challenging narrative. It was clear from the forever twisting story, tricky dialogue and constant set changes that this was a very demanding production for everyone involved. Nevertheless, the brilliant performances on stage made this twisting tale seem effortlessly entertaining and truly captured the magic of Pratchett’s Discworld.

Every single one of the cast members produced some exceptionally convincing performances, so much so, I was a little afraid of Victoria Grayling as the dominant and power-hungry Lady Felmet. The way she adapted traits of Lady Macbeth into her character was brilliantly done and worked incredibly well alongside Vic Gray’s performance as Duke Felmet; her deranged, inferior and guilty husband.

The portrayal of the three witches by Karen Reeves (as Granny Weatherwax), Pauline Crowhurst (as Nanny Ogg) and Roxanne Scanlon (as Magrat Garlick) were also spellbindingly brilliant and guided the audience through the narrative effortlessly. Whilst their characters shone individually, they also worked exceptionally well together too, with their humorous banter proving very popular with the audience.

Talking of humour, I must acknowledge the excellently entertaining performances of Kevin Watt’s (as The Fool), Martyn Williams (as the Demon/Hwel) and Jonathon Michell (as TomJohn). All three of these talented entertainers brightened up the stage with their quick wit and funny sketches, and provided the lighthearted relief this show needed.

On behalf of YourThurrock, I would like to congratulate Thurrock Courts Players on what was a very successful and enjoyable show. It is obvious you have cauldrons full of talent, and we are very much looking forward to your next masterpiece. Personally, I can’t wait to see even more wizardry bangs, magical flashes and amazing fire fingertip tricks!