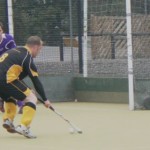 Thurrock Mens 1st team lined up against Crostyx II without their captain Steve Abbott recovering from a vital early season operation, however this did not stop the team romping to victory over challenging opposition.They started with purpose bagging three goals in the first 10 minutes. Matty Gaut bagging a brace and one from man of the match Christian Jenkins. Such was their dominance that they could have had easily doubled the score but that was it until half time. After the break Crosytx upped the pace and scored quickly before the Tees restored the three goal advantage through Matt Lever. There was even more time for two more goals from Thurrock before the end of the game with Matt Lever completing a double and Matty Gaut completed his hatrick. The game ended with Thurrock winning comfortably 6-2 and are fourth in the table.
On Saturday they are away to Wapping II at 1 pm.

The 2s are still searching for their first win in Div 5SE after another closely fought but ultimately disappointing game at Palmer’s College on Saturday afternoon.

Thurrock were without four regulars from their starting line up, so had to promote from the 3s and 4s, and although the team played well and created more opportunities than Colchester, the visiting defence were extremely well drilled.

Colchester were one up at half time, but Mike Hewing pulled the Tees back level early on in the second half from a penalty corner. For the third game in a row, the 2s were the stronger side in the second half, but again failed to capitalise on their dominance. Liam Birch was creating chances from the middle of the pitch, but without their usual forward line up they couldn’t find the net again. With 10 minutes left on the clock Colchester countered quickly and restored their advantage, knocking the wind out of Thurrock’s sails.
The 2s visit Wapping IV on Saturday afternoon at 2.30 pm.

The score does not reflect this Division 8SE game in which Thurrock dominated from the first whistle. After 10 minutes Jimmy Venus collected a pass from Tom Archer and went around the keeper before putting the ball into the net. Thurrock maintained their pressure and Josh Brady was unlucky not to add to the score when he made a solo run from the half way line and beat the keeper only to see his shot graze the outside of the post. Within minutes Brady seized on a mishit clearance and dribbled through the defence to shoot. However he was thwarted by the diving keeper’s outstretched stick. Tom Madden made a strong run on the right and centred for Mat Skinner to slip the ball to Venus whose shot was deflected wide.

In the second half a rare Brentwood breakaway found Thurrock pushing too far up the field and although Danny Hick saved the initial shot, the rebound fell kindly for an attacker to level the score. This spurred Brentwood and they attacked in numbers, however full back Sam Webb was alert and made a series of important tackles to repel the threat. Thurrock regained the upper hand and pressurised the home defence who held out until the sixtieth minute when Venus received a pass from Himesh Patel and flicked the ball into the top corner of the net for his second goal to seal Thurrock’s victory

The Thirds are home at Palmers to Southend III, 11 am pushback

Thurrock’s new Men’s Academy team did not get off to the best of starts against Redbridge and Ilford, and conceded an early goal after 10 minutes.

But they recovered to play some good hockey with Liam Birch scoring the equaliser just before half time.

With great effort from the Thurrock midfield, man of the match Josh Bridges pushed Thurrock forward, with some great chances from Freddie Taylor and Byron Woods, but to no result. With 10 minutes to spare the opposition beat the defence to score the winner. The Academy team is still looking for their first win of the season with the score finishing 1-2.

This Saturday the Academy are away to Saffron Walden.