Police investigate racing on the streets of Corringham 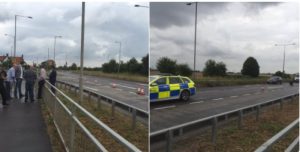 ESSEX Police are appealing for information following a recent spate of dangerous driving in the Manor Way, Corringham.

It follows reports of cars racing each other up and down the road.

“Doing so on the Manor Way is particularly dangerous because of the number of HGVs travelling to and from the Energy businesses which are situated here. The numbers of lorries using this road is also set to increase significantly in the coming weeks”.

“People driving dangerously up and down this road are putting their safety at risk as well as those of the other road users”.

“The consequences of a collision involving a speeding car and an HGV laden with potentially flammable liquids are unthinkable and it could easily lead to someone being seriously injured or, even worse, killed”.

“Essex Police will not tolerate this kind of reckless behaviour and anyone caught will be dealt with positively”.

“Information from the public about this kind of activity will be crucial to us being able to tackle it and deal with those involved and I would appeal for anyone who witnesses anything like this to contact us.”

Anyone with any information about dangerous driving on the Manor Way or has any videos of it is asked to contact Chigwell Roads Policing Unit on 101 or Crimestoppers anonymously on 0800 555 111.