POLICE investigating a serious crash in The Manorway, Corringham are re-appealing for information and releasing CCTV footage.

Two motorbikes were in collision at around 9.15pm on Wednesday, June 14.

The rider of one of the bikes, a woman in her 20s, suffered serious injuries and had to have part of her leg amputated.

Officers are now releasing CCTV footage of the offending motorbike being loaded into the back of a van before it is taken away.

It has been established the motorbike and the van were both using false number plates and the company the van belonged to no longer exists.

Detective Inspector Scott Egerton, from the Serious Collision Investigation Unit, said: “I want to thank the public for their support around this investigation.

“Since our initial appeal we’ve had a huge response with people coming forward with information which has been very important, including the logo on the hooded tops worn by a number of people.

“We are still looking to identify and locate the people involved in this incident and I would urge anyone who recognises those in the footage to come forward.

“We also still want to identify where the van and the motorbike are.

“The number plates used on the motorbike and the van are false and the company the which the van belonged to no longer exists.”

Three people – a 17 year-old boy and two men aged 28 and 29 – have been arrested on suspicion of assisting an offender.

They have all been released under investigation. 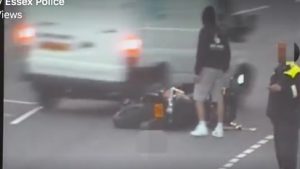