SINCE March 2014, we have been running occasional news items where we dip into the Grays and Tilbury Gazette during The Great War. The point is to highlight, life going on as well as pay our respects to those who gave their lives.

The prompt action which the Tilbury Urban District Council took in regard to position of workers meals under the Food Regulations has had the satisfactory result of settling the matter completely in their favour. It appears that when the matter first arose the Council found that various points seemed to call for explanation, and correspondence ensued with the Food Controller, with a view to elucidating the position.

Some delay followed before a reply was received, and when it arrived the letter appeared to contradict previous views taken and to rule that eating- houses, though displaying the notice that no meals were served costing over 1s.3d., came under the Cake and Pastry Order. The effect of the letter would have restricted the food served for a tea before 6 p.m. to 2ozs of bread. Inasmuch as men in the Tilbury Dock area are frequently called upon to work overtime till 9 p.m., the hardship is obvious.

No man could be expected to perform hard manual labour on a pittance of 2ozs of bread. Naturally there was considerable perturbation among the eating-house keepers, and not a little unrest brewing among the men. In fact, it was openly declared that the rule would be defied unless altered Consequently the Urban Council decided to ascertain the true position, and a deputation on Friday interviewed Mr. U. Towls, of the Food Controller’s Department, and the actual drafter of the Cake and Pastry Order. It was at once explained that there was never any intention to restrict members of the artisan class, especially those engaged on such important tasks as transport work. The order was not aimed at such men, who were working long hours, and, therefore had to make their tea a substantial meal. The whole object of the Order was to check the wasteful habits of well-to-do women eating pastry in restaurants .

On the other hand, the letter which had given rise to trouble at Tilbury was erroneous, and if eating- house keepers displayed the 1s. 3d. meal notice, and between 3 and 6 p.m. made no higher charge than 6d. for a plain tea, they would be outside the Cake and Pastry restriction, and any quantity of bread could be served. Further, the 6d. tea did not forbid an additional meat dish or eggs if required.

Following on the Tilbury Urban Council’s deputation’s interview in London, they have now received the appended letter from the Food Controller’s Department on the subject and in confirmation of the explanations given at the interview:-

“The position in regard to a meal begun between 3 and 6 p.m. is as follows:-
(including beverages) for a meal begun between 3 and 6 p.m., which does not include meat, fish or eggs, and a notice to this effect is exhibited as required, there is no rationing provision whatsoever, while in the case of a bona fide meat tea, meat, fish or eggs may be served at an additional charge and still be exempt from the rationing provisions of the Public Meals Order and the Cake and Pastry Order, provided the total cost of the meal does not exceed 1s. 3d.
If the public eating place does not satisfy this condition, but is a public eating place at which no meal is served costing more than 1s. 3d. (exclusive of beverages), and this fact is displayed as required, not more than 2ozs in the whole of bread, cake, buns, scone and biscuit may be served to any individual customer between 3 and 6 p.m.

At every public eating place other than those described in (1) and (2) above, there is no limit on the amount that may be consumed by any individual, but the establishment falls within the provisions of the Public Meals Order, 1917, and is accordingly rationed by bulk.
———————————————-

There was a good attendance at the Baptist School, Hathaway Road, Grays, on Thursday evening, when a Temperance meeting was held under the auspices of the Grays Lodge of Good Templars, at which the principal speaker was Mr.Lou Batchelor, an ex-prize fighter of East Ham.

Mr Batchelor opened by alluding to his forty-two pugilistic encounters, saying he was the hero of forty of those fights, and was still a fighter – in the Temperance cause. Telling of his early life in various parts of the world, he said he had a varied experience in those eleven years, and at the age of 23 was almost a hopeless drunkard. Converted by his wife’s prayers while a bookmakers tout, he looked back on his past life with remorse. Since the great change ten years ago he had been an active Temperance worker.

Proceeding, the speaker told numerous stories of rescues effected in his Midnight Mission in Whitechapel. The country’s drink bill was £200,000,000 a year, and the sooner they got a man at the head who had the courage of his convictions in regard to the drink question the better. Did the country need the utilisation of grain and sugar in brewing? Colonial troops had come from a prohibition country and fallen as a result of the drink in the country. Yet some working men were found to say they could not work without their beer, and that they would die if they didn’t get it. “Then let them die!” said the speaker. He had three sons in the Army, and would rather they died at the hands of the Germans than at the hands of a British publican. (Applause). They ought to be up and doing, agitating for the closing of the public houses and clubs, which were turning men into beasts. (Applause).
————————————-
DIED IN THEIR COUNTRY’S CAUSE 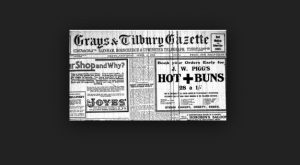