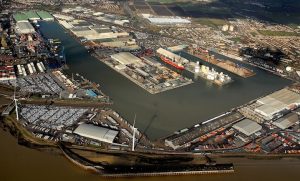 A TILBURY-based company has said its 800,000-tonnes-a-year refuse-derived fuel (RDF) plant at the port could close and has told employees they face redundancy.

It is estimated that up to 65 employees could be affected.

A Suez spokesman said: “We can confirm that we are considering options for the long-term future of our alternative fuels production facility at Tilbury Dock.

“Meetings were held last week with members of staff employed at the facility to inform them that they are at possible risk of redundancy, and we are now going through a formal consultation process with individual employees.

“As such, no decisions about the future of the plant will be made until this consultation process has concluded.”

The facility was opened in 2015, and was hailed at the time as Suez’s first plant able to process both RDF and solid recovered fuel.

It was developed along with the purchase of Nordic Recycling from Forth Ports, which runs Tilbury.

Nordic went into liquidation in 2015 due to “poor trading conditions”.