Arena Essex: Veteran Terry proves there is plenty of bottle in Bottling 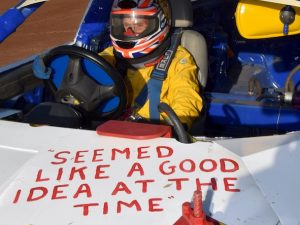 PRI Legend Banger racers provided one of the meetings of the year at Arena Essex on Sunday with Benfleet racer, Vic Bilkey emerging as the final winner, whilst Basildon’s Pete Westwood went one better than his result of 2016, by winning the Destruction Derby. 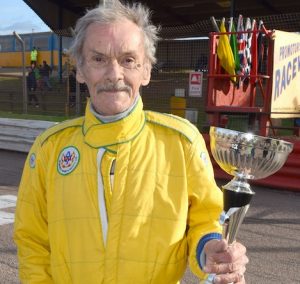 The entry consisted of well over 60 cars with many of the competitors in that sort of age bracket, in fact the final began with the front row consisting of 64 year old Bob Dunn, alongside 68 year old Lennie Locke. They were spring chickens though compared to 75 year old Terry Bottling, who’s car earned him one of the J Botting Installations Ltd Smart Car awards. It was nice also to see a spot of nostalgia with the Ford Cortina of Trevor Ballard and the Ford Capri of Terry Arnold rolling back the years, although the Austin A60 of Richard Boulton drew most attention. Despite having done this meeting last year in the same car, and a caravan race too, the old car still dished out plenty of punishment, not least to the diminutive Ford Ka of Glen Martin.

The first heat of the day had a stoppage to check on Kevin King, who went in heavily at the end of the home straight. Dennis Whiteman took the win in this one, in a car decorated in the colour scheme of the late Dave Sanderson. Heat two featured 40 cars on the grid and a series of big crashes on the back straight which left Dave Monaghan embedded in the back of former Superstox World Champion, Glenn Salmon. Ricky Martin found himself stranded on the inner kerbs whilst team mate Dean Ryan took heavy damage in a crash with John Ellis and Lee Medhurst. Vic Bilkey took his first win of the day.

The consolation saw Ryan take some revenge on Medhurst before taking a heavy hit from Paul Foreman. Chris Coveney went on a wrecking spree which accounted for Terry Botting amongst others whilst Dean Page raced through for the victory.

The 30 car final saw Mark Strevens piled hard into the fence by Dennis Whiteman whilst Terry Lucas brought about a stoppage having gone into the fence at the end of the home straight. At the restart Terry Peacock and Allan Trickett had a big crash out of turn two and Dan Clark launched Dave Ricketts into a big crash later in the lap. Clark later went up in flames as Bilkey raced to the win.

Having come close to a race win earlier in the day, only to lose out in the final laps, Mark Deacon finally got the win he deserved in the allcomers race at the end of the day, earning a sportsmanship award into the bargain too. The Destruction Derby that followed saw Bob Dunn followed hard into the parked up Dean Page car by Inky Crittendon and the Cortina of Ballard get heavy damage from Lee Macey. Despite being on the end of several big hits, John Bayley kept running almost until the bitter end, although once he had a head on with Mark Deacon he was unable to back away, leaving Pete Westwood to land the final blows of the contest.

The Supreme Championship for the Stock Cars saw a dramatic finale following a mid race stoppage for a huge crash which befell Vic Bilkey Jnr, who spun into the centre of the track and was struck head on by Steven Donovan. Billy King had lost the big lead he had built up prior to the stoppage and he moved over to allow Nathan Roberts through, clearly of the opinion that being in the lead into the last corner was not the ideal place to be in a Stock Car race. Roberts was wise to the move though so we had the odd situation of neither driver wanting to lead heading into the final corner. It briefly looked like third placed Dave Palmer was going to luck into the win, but the game of cat and mouse saw King keep Roberts on the outside as they approached the final turn and floor the throttle entering the corner, catching Roberts off guard and unable to land a hit.

The best race of the day was the next race in which the four car lead battle came to a dramatic conclusion on the last corner with Nathan Roberts launching off the kerb at race leader Dave Palmer, Palmer getting sideways as Roberts was hooked fencewards by Billy King. Having put the bumper in from the back of the group, Luke Ashton-Jones so nearly managed to pass Palmer on the line in a blanket finish. Making up for his narrow loss, Ashton-Jones won the final race of the day, just ahead of Vic Bilkey Jnr.

Finally the Ministox finished the season with three very good races. Aaron Totham won heat and final in his very final meeting, whilst David Shearing similarly bowed out of the formula with a heat win and the overall track championship title. Third place in the track championship behind Totham was Abbie McGuiness, who should start as one of the favourites for 2018 success.

The next action at Arena Essex is the final meeting of the 2017 season, the annual National Unlimited Banger Firecracker. Reliant Robins and Stock Cars provide the support for this regular highlight of the season. Start time 1pm.