Brexit: Government in a hole over housebuilding says Thurrock MEP

THURROCK Euro MP Alex Mayer took charge of a mechanical digger last Friday off High Road, Fobbing in an attempt to dig Thurrock out of a hole over the Government’s botched Brexit policies. 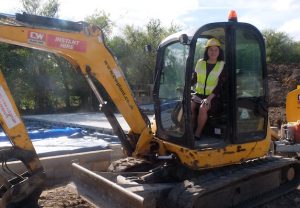 The Federation of Master Builders, which represents small and medium constructions firms is protesting that the Government’s plans on migration post Brexit could cripple the industry at a time when new homes are desperately needed. Research by Heriot-Watt University says that Britain needs to build over 300,000 homes each year until 2031 to solve its current housing shortage.

At the moment carpenters and bricklayers from the EU can work in Britain without any red tape, under the Government’s post Brexit plan only those earning over £30,000 would be allowed in. Migrants can move to the UK if their employee acts as a sponsor. However, many businesses in the construction sector are small and employee less than 20 people. This clunky bureaucratic model is completely unsuitable for these small businesses. Already, 44% of construction businesses say they have concerns about recruiting skilled labour.

Alex Mayer MEP said: “Stopping carpenters and brick layers coming to this country, when we have a shortage and desperately need them, is digging yourself into a hole for no reason.”

“No-one voted for Brexit to stop houses being built for those who need them. The Government must urgently look at its plans and come up with a solution that meets the needs of the construction industry.”

Azad Azam, Managing Director of DPB Ltd and a member of the Federation of Master Builders (FMB) said: “If the Government suddenly makes it much harder to recruit tradespeople from the EU, then that would seriously impact on the capacity of our business and potentially add significant delays to the new homes we’re building.”

“We’d be very happy to recruit UK-born workers instead if they were available, but the numbers of good tradespeople of any nationality is in short supply in most places. Given this, what’s really worrying is the idea that in future small firms like ours we will be at an unfair disadvantage, because we won’t be able to get involved in complicated bureaucratic processes to provide visas for EU or other migrant workers.”