TipToe’s Danni has the Essex Factor

Danni certainly has the (Esse)X Factor!

A TEENAGER from South Ockendon is making her mark in the popular singing competition, FactorEssex. 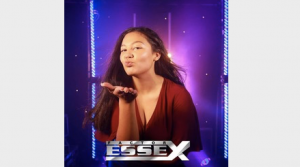 The competition has been running for many years and follows the format of the popular ITV based music and entertainment show. Run by the organisers of the South Essex Entertainments awards, and Lee Knell.

Danni – Leigh Tranter, who is 14, was picked from hundreds of hopefuls who auditioned for the competition a few weeks ago, to be on team Joe, as her mentor.

Singing the Adele hit “Someone Like You”, the panel of industry judges were very complimentary of her rendition, with one of them commenting “…I’m angry that you are in the competition because it means my acts are under threat. That was exceptional”.

Danni – Leigh has been a pupil at the well-known TipToe Stage School and attends their branch in South Ockendon.

Commenting, she said: “At first I wasn’t going to put myself forward for it because the audition process was tough and I thought I would be too nervous. But Julie, our Principal, talked me through the process and made me realise I would regret it if I didn’t go for it.

“She worked on my song with me in my weekly private lesson and I felt so excited when I got through.

“Now the hard-work really kicks in as I have to perform every weekend until the winner is announced in the grand final at the end of the November”.

Danni – Leigh wasn’t the only TipToe pupil to successfully win a place in the competition. 11 year old Grace Brazier also wowed the judges and secured her place but sadly was not able to continue due to prior engagements.

Julie Barker, Principal of TipToe said: “Not only are all the teachers proud of Danni – Leigh and everyone who auditioned, it’s great to see the commitment from Grace, who decided not to continue as she didn’t want to let her other teammates down. They had already committed to dance competitions, festivals and shows. It says a lot about her professionalism to have made that tough decision at such a young age.”

TipToe are now working on their next annual production which is premiering in 2019. If you would like more information on classes and how to join this popular group, please email tiptoestageschool@outlook.com, call 07940521864 or find them on Facebook of Twitter @TipToe1986